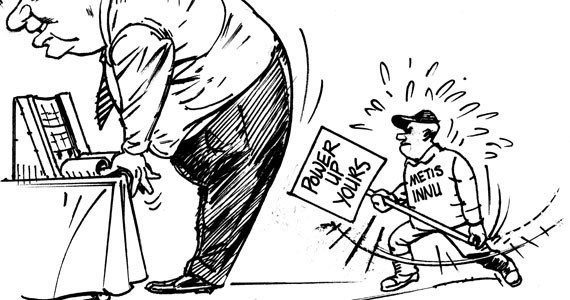 Dear Darrell D: Thanks for commanding your overworked spinmeisters to drop everything whenever I call for government info. Now, with their guidance, my reporting will never stray too far from truth, justice and the NDP way. Let me give thanks by offering these political insights on the $6.2 billion Lower Churchill power project. Darrell, watch your back! The news from Labrador is not good. Liberal MP Todd Russell has just released two informal surveys showing a huge majority of Labradorians are damning the dam!

"People are telling me if they're going to inherit one hundred percent of the [environmental] damage, they damn well want to be compensated," Russell says. "The people in Labrador have often felt," he adds, "that we are a land rich in resources, but still why are our people suffering for lack of basic services?" He points out that Labradorians themselves won't have access to Lower Churchill power, but will continue to pay sky-high rates for electricity from stinky, diesel generators. Yes, there'll be a few years of work building the dam, but only a handful of maintenance jobs after that. Russell wants the suits at the power companies to offer a lot more.

"It's my firm sense that unless these companies come to the table with more than what they currently offer," he says, "then the people of Labrador are saying let the river run, there are other alternatives."

I know you keep saying, Darrell, that at least the Innu are supporting the dam. Alas, that's not quite true. Innu grand chief Joseph Riche reminded a federal environmental panel, which began hearings last week, that his people have yet to vote on the project. "Our consent is required for the Lower Churchill development," he warned, "but it has not yet been obtained." Since the Innu seem split, it's not certain how the ratification vote will go. Meantime, the association representing Labrador Metis---a far larger group than the Innu---is so angry at being left out of negotiations, it's seeking a court injunction to halt the environmental hearings until its land claims are recognized.

Fortunately, your friend and mine, Bruno Marcocchio of the Sierra Club, piled into his ancient Ford Escort last week and drove all the way from Sydney to Happy Valley–Goose Bay. He's working hard there to persuade the environmental panel to reject the big dam. If he's successful, you could step gracefully away from the whole damn mess. Hallelujah! Otherwise, I fear you'll wear the blame when Nova Scotia Power tries to profit by wheeling Lower Churchill juice from Cape Breton to New England. I predict Nova Scotians will be some pissed when they learn they'll have to subsidize the exports partly by paying for the transmission lines from Newfoundland and into New Brunswick.

Marcocchio is promoting an alternative scheme, one that tries to shift from relying on distant power dams to local generation. "The Lower Churchill project keeps us firmly rooted in that now-dead paradigm of ever-increasing, large, mega-project capacity delivering power to distant and ever-increasingly hungry markets," he says. "That's gone now, the paradigm has shifted and we're moving into the age of smart-grid technology."

For Marcocchio, that means a grid that monitors and directs power efficiently while allowing the widest possible range of small, local producers to sell their power to the grid. Yes I know, Darrell, that Nova Scotia already uses special meters that let homeowners sell power back to the grid, but Marcocchio wants a bigger investment in such smart-grid technologies rather than pouring billions into environmentally destructive projects like the Lower Churchill.

To be honest, I'm not sure about smart-grid technologies. But I do know that billions for distant dams, transmission lines and undersea cables will not magically turn us "clean and green."

Time to step back from the Lower Churchill abyss and hold public hearings on our energy future---before it's too late. 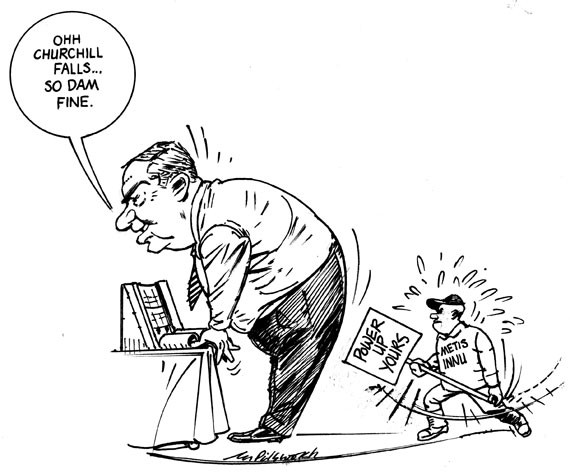