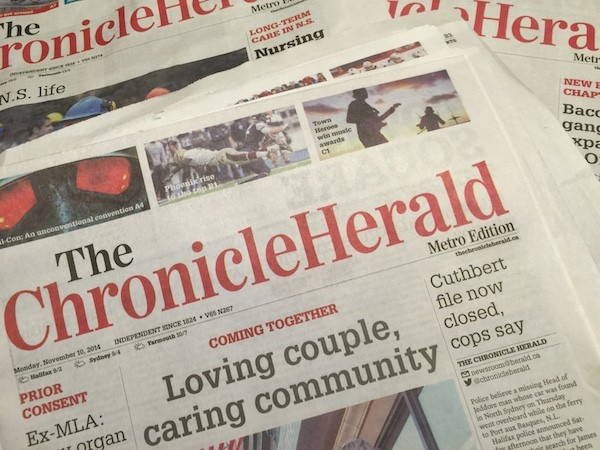 In one of the biggest Atlantic Canadian media stories in recent memory, the Chronicle Herald has purchased all of Transcontinental’s 28 newspapers, websites and four of its printing plants.

All of Transcontinental’s media outlets in Nova Scotia, New Brunswick, Prince Edward Island and Newfoundland and Labrador have been sold and will operate—along with the Herald’s seven publications—as a newly created media company dubbed SaltWire Network Inc.


The deal includes larger papers like The Telegram in Newfoundland and The Guardian in PEI, along with the Herald’s longtime competitor the Cape Breton Post and more than two dozen regional weekly papers. Transcontinental also owns a 33 percent share in Metro Halifax, but free daily hasn't been impacted by the sale.

In a story on the Herald’s website announcing the deal, co-owner Mark Lever says he intends for SaltWire to go “head-to-head” with Facebook, Google and CBC.

According to the company, 650 Transcontinental employees in Atlantic Canada are part of the deal. Most found out about the news this morning during staff meetings. Writes TC Atlantic content director Thane Burnett:

“For years, across Nova Scotia, the nation’s oldest, independently owned newspaper has been locked in a prolonged print and online war with the Quebec corporation’s properties, especially The Cape Breton Post, Truro Daily News, The News in New Glasgow and strong weeklies dotting the province.

“Some journalists in the now former TC Media publications have spent lengthy careers viewing The Herald as arch rivals to be battled every minute of the day.

“Now, suddenly, the two former foes are under one banner”

According to Lever, again in the Herald, all employees will be offered jobs with the same salary and same benefits they have now.

I asked what this means for striking workers in Halifax, Mark Lever says strike will continue. Says company has offered a fair deal


The Herald—whose newsroom has been on strike for over a year—apparently financed the deal through its Toronto banker Integrated Private Debt Corp.

“We were told that the Herald’s demise was imminent if it didn’t immediately cut wages and other benefits to newsroom staff,” writes HTU president Ingrid Bulmer. “Apparently, that was a total fabrication. The company is not struggling but is instead planning to expand.”

Bulmer says the announcement proves the Herald never intended to bargain fairly with the union, an accusation the HTU has previously brought to the Utility and Review Board.

The HTU president also claims Lever is “biting off more than he can chew” with the new investment given his business track record of corporate bankruptcies.

“He has proven to be incapable of running one newspaper,” writes Bulmer “Now, he wants to expand his sphere of incompetence. It is simply mind-boggling.”

All the newspapers that are now under the same ownership as Halifax Chronicle Herald https://t.co/7OXRnKFHX5 pic.twitter.com/RwiH0dKC81


Disclaimer: The Coast has a printing contract with Transcontinental’s Halifax plant, which was not part of the SaltWire deal.