Chelsea Handler shares her passion for pot with Halifax

On the brink of legalization, the comedian and Netflix fixture is visiting for a little weed talk. 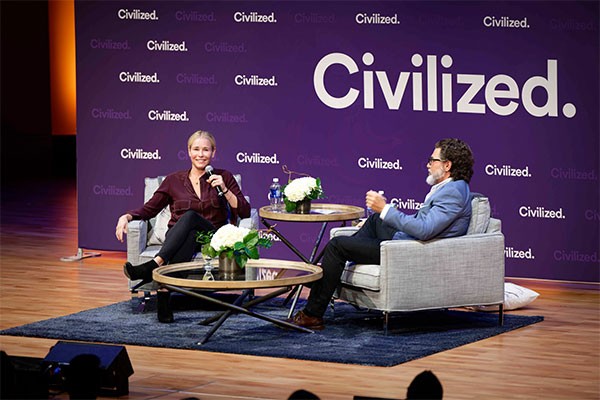 Willie Nelson—now more of a white-haired stranger—laughs as he passes Chelsea Handler a blunt. "Pot is like sex," he chuckles. "Some is better than others, but it's all good."

This is the fourth Episode of Handler's 2016 Netflix series, Chelsea Does. In this episode, Chelsea does...drugs. Lots of them. In the show—as in real life—Handler isn't shy about her relationship with drugs and alcohol. In a recent Buzzfeed interview, Handler confessed, "I've done pretty much every drug—besides, like, heroin and crystal meth."

But now, at 43, the straight-talking comic—best known for her late-night talk show Chelsea Lately—has switched gears, turning to cannabis to relieve her anxiety over the state of "Trump's America."

"The legalization of marijuana is something that I've become very passionate about in the last couple of years, because it's the only thing that's gotten me through the Trump administration," Handler says. "I wanted to channel my outrage into something that was actually helpful and that would make a difference." That something is cannabis legalization. "For me, cannabis is not drug. It's helpful. And it's such a great alternative to so many of the other options that people are abusing out there."

The legalization of marijuana is also a deeply political issue to Handler. In June, president Donald Trump approved Alice Marie Johnson's bid for clemency after Johnson had served 21 years for a non-violent drug offense. In response, Handler tweeted: "What else you got @realDonaldTrump? Let's commute the sentences for all African American first time drug offenders."

For Handler, as for many others, the legalization of cannabis is also a racial justice issue. In her recent bid for governor in New York, Cynthia Nixon pushed for legalization saying, "People across all ethnic and racial lines use marijuana at roughly the same rates, but the arrests for marijuana [in New York state] are 80 percent Black and Latino. Effectively marijuana in New York State has been legal for white people for a long time, and it's time that it be legal for everybody else."

With Canada on the brink of national cannabis legalization, set to take place on October 17, Handler has teamed up with New Brunswick-based cannabis lifestyle site Civilized to present a seven-date Canadian tour that ends with the Halifax stop, Sunday at the Rebecca Cohn. A Civilized conversation with Chelsea Handler is an interactive comedy show that Handler describes as a conversation. "It's a fun night out where we can talk about marijuana, what's available and why it's awesome. And we can talk about all the responsibilities that come along with it."

Handler hopes the Civilized tour will help destigmatize cannabis, drawing more people—especially women—into the culture. "When I was reintroduced to the marketplace, I was so excited because you can micro-dose now. Everything is labelled and it shows you what kind of strain you're smoking and what the ratio of THC versus CBD is. The standards companies have to meet are so high now, that no one has to be scared to enjoy smoking it. You know what you're doing, and you know what you're smoking right away. You don't have to go and get blottoed out of your mind and be hiding in a corner in the bathroom. It's so much more than that now!"

Handler promises to tackle even the most serious issues surrounding cannabis legalization with her signature dry and candid wit—making Sunday's event "a fun night out" for those who are avid users of cannabis products, and those who want to learn more.

If Omar Khadr is a terrorist, then so am I