Sweet Hereafter Cheesecakery adorns simple and delicious cheesecakes with various flavours, to varying degrees of success. But as desserts go, they’re as good as Golden. 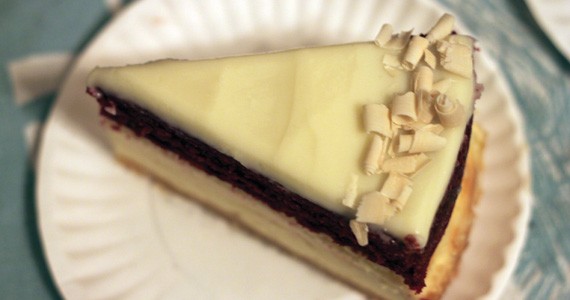 "I think this could be the beginning of a beautiful friendship," Dorothy says to Blanche and Rose after a cheesecake helps break the ice between them in the first episode of The Golden Girls.

On the way to Sweet Hereafter Cheesecakery, did I consider having a Chico's kind of day and wearing an oversize cowlneck tunic and palazzo pants? Yes. Did I want the restaurant to have wicker furniture and a staff of Herb Edelman and Harold Gould lookalikes? Definitely. You can't help but think of that show when you think of cheesecake.

My dreams are shattered as soon as my four friends and I walk in. The walls are covered in mall-punk hot pink and black damask. Small chandeliers hang from the black ceiling. Glossy white tables and chairs fill most of the room, with fuchsia armchairs and a booth covered in gold velour punctuate the boudoir chic decor. It's what I imagine Jeannie from I Dream of Jeannie's life would be like if she lived inside of an Avril Lavigne perfume bottle.

A lit counter has an array of cheesecakes, at which we stand awkwardly gawking while waiting for staff to appear from the kitchen. After about a minute, two servers come out, give us a friendly greeting and gamely attempt to figure out a way to seat us.

The small restaurant is packed, with a big group crammed into the front of the restaurant, tables re-arranged to fit their sprawl. We take four slices to go---one for each Girl.

We opt for two chocolate bar flavours--- Coffee Crisp and Oh Henry!---a slice of red velvet and a slice of blueberry crumble ($8 each), passing up a series of equally appetizing options, including a vegan cake. Each slice is delicately placed into a roomy, black take-out box, drizzled with its respective topping and handed over. We hit the road.

Once home, we slide the fat slices out on the table. Then we say grace---we tell a story about St. Olaf, thank each another for being a friend---and dig in.

The cheesecakes are all creamy, sweet and slightly tangy. They strike a deft balance between dense richness and airiness. Each cake is well-cooked, too, with no cracks and nice, puffy edges.

The immediate consensus is that the Oh Henry! flavour is the best. It's nutty and has the same caramel and fudge notes as the chocolate bar. Whatever Don Draper came up with the latest Oh, Hungry? ad probably had the opposite feeling of someone walking over your grave when I took my first bite, because I finally got it: Oh, Hungry? Oh Henry!

In comparison, the Coffee Crisp cake is a disappointment. There is very little coffee flavour in the cake and the little chocolate bar crumbles on top are spongy and pulpy instead of a crisp accent. If nothing else, this slice of cake crystallizes the reason why we don't have a chocolate bar called Coffee Uncrisp.

And while red velvet was a striking slice, the sheet cake half felt unnecessary. Halfway through the slice it fell off the top and was pushed aside for what was actually the best cake of the night: the plain cheesecake. With no bells and whistles, the simple cake was absolutely terrific.

You know, Bea Arthur never actually liked cheesecake. And, if I'm honest, I don't love it either. But the cheesecake at Sweet Hereafter makes me think that this might at least be the beginning of a beautiful friendship.