Best of Music winners Carmen Townsend, Ghettosocks and We’re Doomed sound off about differences, similarities and what they love about making music here. 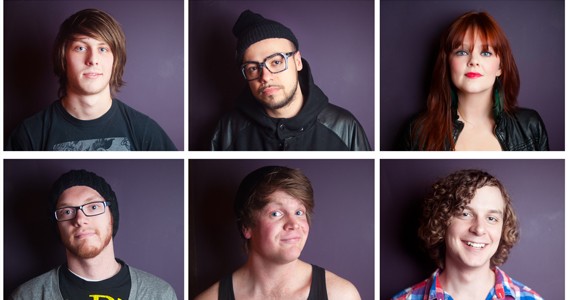 Angela Gzowski
The gang's all here.

[Listen here to a podcast of the conversation]

Halifax has a strange musical map. A small-town feel, but enough varied genres that make for a rich scene. But because of the size, there are occasions that a crossover show will bring different groups of fans together, cautiously eyeing each other from across the bar---where did all these new faces come from?

When this happens, it's like a breath of fresh air. New sounds, new people to crush on. We brought BOM winners Ghettosocks, Carmen Townsend and We're Doomed together into a north end living room, on a very spacious sectional couch, to talk differences, similarities and what they love about making music here.

It turns out there are a lot of universal truths. The Prairies are brutal. Music Nova Scotia is valuable. Ninety percent of a musician's friends are in bands. They all love Jon Epworth.

Meet the team: We're Doomed is a pop-influenced progressive rock band, a group of young guys who swear by the tightly knit all-ages scene. "We play a lot of different shows," says guitarist Nick Jones. "We always get lumped in with a lot of heavy bands, we play a lot of metal shows," says Simon Outhit (guitar and vocals). "We're always the light band on the heavy show and the heavy band on the light show," says drummer Scott Tiller. "We're always classified as a metal band." Outhit, Jones, Tiller and bassist Mike Andrews are transitioning from all-ages to bar shows. They live to tour, and have the momentum to do it. Last summer's EP, Like A Machine brought together heavy riffs, syncopated beats, face-melting solos and heartfelt lyrics.

Ghettosocks is a self-made man with a lot of friends. The Juno-nominated, ECMA-winning rapper/producer/DJ co-owns his own label, Droppin' Science, and is half of Teenburger and Twin Peaks. You'd think he's still hearing the locomotion from last December's month-long VIA Rail sponsored Train of Thought tour, because he just doesn't stop. He returns to Halifax in April after a trip to SXSW. He's not here long---the ECMAs are next on the list, then Europe. "What I do is really grassroots, I have no delusions of grandeur," Ghettosocks says. "It's about contacts, making those, then bring them out and show them what Moncton's made of."

Carmen Townsend plays both acoustic theatre shows and wild rock stages. Her huge voice and charming stage presence easily wins over both crowds. Last year she released her debut, Waitin' and Seein' and toured across the country with Heart, something that still takes her breath away ("I can't listen to them on the radio anymore, I cry,"). She's in high demand and her schedule can be a tough one to juggle (her band lives in Cape Breton and needs to make special trips for her local shows).

She's all about pushing herself this year, though. In her songwriting, to experiment musically, to take on more of the business side of things (a necessity after a completely disastrous video shoot for "River Rat" left her holding the bag, sans video). "I've been doing this my whole life, it wasn't like, 'hmm, I'm going to be in a band I want to sing', it's just what I've done. I don't know anything different."

Halifax is "amazing," says Tiller. "The only issue is places to play. You can only play Halifax so many times. There's not that many venues, they keep closing."

"It's hard enough for out of town bands to get here, but then there are even less places to play," says Outhit.

Ghettosocks sees our diminutive region as an advantage, citing proximity to other easily accessible Maritime cities. When he brings in musicians from out of town, "it's easy to bring them around the region," he says. "The most challenge I've had is breaking west of Ontario."

Regarding touring Canada, Townsend says, "If you don't have a good sense of humour, you might as well just stay home." But when she was travelling from her hometown of Christmas Island to Halifax, it never seemed like a chore. "Being from Cape Breton, Halifax has always has this magic...it always seemed like such a big deal. Like with Sloan, jale, Hardship Post, Rebecca West, it's always stayed that way. I don't think there is a better scene. I remember being 16 and playing the Birdland---it was always like, 'Yeah we're going to Halifax! Gonna be a superstar!'"

"In comparison to Ontario there is a community," says Jones. "And it's growing, like Pop Explosion is getting insane."

They also had advice for each other. Some of it was Chicken Soup-style stuff, things we all know but still always need to hear. Some centred around the divide between the all-ages and bar scene.

"Seriously, play all-ages shows," says Tiller. "You play an all-ages show, and you stop playing, those kids don't say a thing, they watch you, they look right at you the whole time."

"I owe pretty well everything I have, as far as playing shows goes, to The Pavilion and the fact that I was able to go there, volunteer and spend all my time there from the ages 14 to 20," says Outhit. "Chris Smith is doing a great job."

"It's a whole other dynamic," says Outhit.

"They'll say 'I listen to your album, I listen to every single lyric---I was having a hard time a couple months ago and I listened to your album and it helped me," says Tiller.

"It would be really awesome if you guys played," says Andrews.

"I'd totally do it!" says Townsend.

"It would be really cool to go to The Pavilion," Jones says, "and see young hip-hop."

"You guys wanna do a show in April?" asks Ghettosocks. "Because now would be a perfect time to promote it... And there are younger groups in the rap/hip-hop scene. Like Weirdo Click, Slomo, Shevy Price. It's cool to see what the next generation will bring you."

"So from your guys' side," says Outhit, "what do we need to know? Please!"

"I need to surround myself with positive people," says Townsend. "You are going to have your van break down, it's going to happen, and you need a sense of humour. I take my gym shoes on tour, I exercise. It sounds really lame to say, but don't ever give up, learn to laugh at yourself more than anything. it will really help. Especially in a van. In the middle of winter. In Winnipeg."

"Having a good work ethic is important," says Ghettosocks. "There's so much that can be done and if you don't take advantage of a situation you can miss out on opportunities. I know it sounds cliche, once you last or live as long as I have or Carmen has---how old are you guys anyway?" ("Twenty to 23," says Outhit.) "Longevity is passion-driven, the time will fly by. I hear a lot of people like, 'This is my year. If this doesn't happen, then I'm plan B-ing it'---those people aren't meant to do it."

"We've been lucky enough to work with Josh [Hogan] from Red Tentacle and Hassan [King]. They've really shoved that down our throats," laughs Outhit.

"It's classic. That's sort of more in my arena," says Ghettosocks. "Like, that's the motto: 'This is the year, it's the takeover y'all, we're gonna do it big this year.' Just everybody says the same thing and next year, we're like, 'Whatever happened to those dudes? Why do I have this t-shirt?'"

"I want to be a sustainable band," says Andrews.

"So we can stay in a van sweaty and disgusting forever and be able to go on the road and make albums," says Tiller.

They all laugh. "Forever?"

Stephanie Johns would like to give a BIG thanks to Nick Jones for editing the podcast with his mad ProTools skills.