David Askevold: Once Upon a Time in the East makes its last, glorious stop in Halifax. 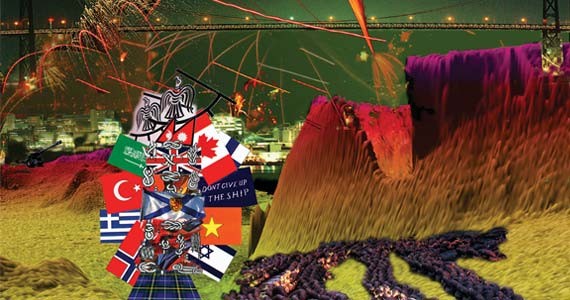 Upon entering the gallery, you are confronted by a six-foot tall tangle of metal cables that seems both chaotic and somehow methodical. To your right, you glimpse a storyboard-esque arrangement of distorted colour photographs; behind you, a monochromatic photo of New Mexico, a circular diagram and a story of a boy who is bitten by a rattlesnake. What's the connection?

David Askevold (1940-2008) studied Anthropology at the University of Montana and Art at Brooklyn Museum Art School and Kansas City Art Institute before moving to Nova Scotia in 1968, where he taught his famous Projects class at NSCAD.

The Art Gallery of Nova Scotia's 43-piece retrospective exhibition of Askevold's works covers everything from his installations and pioneering video works to his photo text and later digital images. And Askevold's subject matter ranges as widely as his materials; it must have been difficult putting a title to a retrospective so varied in media and focus.

"I thought Once Upon a Time in the East was an apt title because it situates Askevold in Nova Scotia, as well as speaks to his interest in narrative forms," says David Diviney, AGNS' curator. The exhibition's opening installation is a bit of an anomalous piece. Diviney says Askevold considered "3 Spot Game," a sculpture from 1968, his first mature work. The wall-mounted contraption of steel cable and one-foot Plexiglass squares depicts the paper-and-pencil math game "Sprouts." Aluminum bars fastened to either end of the cables are inscribed with the rules of this game of intersecting lines and spots.

"He intended to make a purely objective object," says Diviney. Of course, Askevold wasn't entirely successful, since the sculpture's material and scale were subjective decisions. And he soon abandoned sculpture altogether in favour of print and video media, but his fascination in games and prescriptive rules didn't end.

In "Learning About Cars and Chocolate" (1972), the artist recorded himself on a balcony, speaking to an off-camera companion for 20 minutes. The rules: 1) every time a car drives by, Askevold asks what colour it was, and 2) after every car, he bites into a chocolate and describes its flavour.

Askevold's early video work was unprecedented. "Check your iPhones at the door and go back to a time when this technology wasn't accessible to the public---to make art with it was a foreign idea," says Diviney.

Foreign ideas are another of Askevold's prevalent themes---many of his works focus on subjects outside of mainstream concern, such as ghost images and the occult. "The Poltergeist" (1979) is a prime example: a series of photographs, created in collaboration with artist Mike Kelley, use photo manipulation to depict supernatural occurrences.

Having moved around, Askevold had a lot of autobiographical influences to work with, including many of his later works focusing on Nova Scotia.

In addition to its provincial relevance, "The Nova Scotia Project: Once Upon a Time in the East" (1993) is also another example of Askevold experimenting on the cusp of technology. The nearly 12-by-26-foot wall consists of aerial photographs of Nova Scotia's 273 harbours, a very privileged point of view in pre-Google Earth times.

"David was a difficult artist to put your thumb on," says Diviney. "But David had a far-reaching influence on particular artists and art in general." His retrospective wouldn't have been one of the top 50 shows on Artforum's 2011 list otherwise. Besides, this way, there's something for everyone.