Chaos at the Chronicle Herald

The future's a worry for the region's daily paper of record. 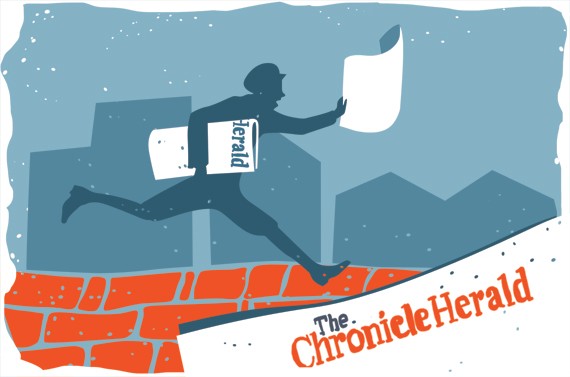 This story’s kept changing. At first, 20 newsroom employees at the Chronicle Herald were to be victims of cost-cutting layoffs. Then the number started to drop, as some employees left for early retirement and others took buyouts. This past weekend, the Halifax Typographical Union voted in favour of concessions that dropped the layoff list down to two. All total, 15 unionized workers are gone and the Herald’s newsroom has decreased by roughly 20 percent.

The region’s daily paper of record is trying to keep itself afloat, but the last few weeks have left a lot of anger, confusion in their wake. In tough journalism times, the Herald’s future seems troubling. President and CEO Mark  Lever says the changes allow the paper to focus more resources on journalists. But getting rid of reporters to accomplish that seems like trying to save a sinking ship by lobbing a grenade in the hull. “A lot of the staff are disillusioned,” says Ingrid Bulmer. “The morale is pretty bad. There’s a lot of mistrust, and confusion.” The Halifax Typographical Union president and Herald photographer echoes what other newsroom staff have told me; that the last month has raised serious questions and many doubts about the future of the Chronicle  Herald.

A word about Halifax: It’s small. That’s especially true in journalism circles. I personally know most of the people written about in this story. Some of them I consider friends. Some I don’t. I reached out to many newsroom employees for this story and several spoke with me, but only off the record. For that reason, I won’t be using any of their quotes, but suffice to say the temperament inside the Herald’s offices has been a mixture of bafflement and outrage. That at least, management and the union agree on.

“Obviously, the mood is not good,” says Mark Lever about this “difficult time” with his staff. “I’d say most are happy to move on to the next chapter.”

Earlier this fall, management went to the union looking for employee concessions. When “informal” talks went nowhere, the layoff list went out. Twenty names, some of the most well-known reporters in the province, were about to be out of work. They included consummate veterans like Lois Legge and Mary Ellen MacIntyre, award-winning young reporters like Brett Bundale and Laura Fraser, regular columnists such as Roger Taylor, Chris Cochrane and Claire McIveen, as well as photographers Ryan Taplin and Adrien Veczan. Yarmouth bureau chief Brian Medel was also on the list, which coupled with the early retirement by the Valley bureau’s Gordon Delaney, was to leave the entire southwest of the province unstaffed.

Selena Ross and Frances Willick were also given notice. Ross and Willick’s award-winning stories about Rehtaeh Parsons were one reason the Herald boldly broke a publication ban last week. Willick’s job is safe, now that the concessions are accepted. Ross took a buyout package, and is now working with CBC.

I’m told the only two actual layoffs at the paper will be staff reporter Michael Lightstone and graphic designer Matt Dempsey. Those are both “voluntary,” Lever says. As in, they found another opportunity already. Bullshit, says the union.

“Neither of the two left on the layoff list have jobs lined up,” Bulmer writes in an email. “I wouldn’t say it was voluntary at all. Had neither of them been placed on a layoff list they would still be employed at the Herald.”

At the same time newsroom employees were facing an axe, managers were being promoted. Sorry, not promotions, “reorganizations” says Lever. No big raises, he emphasizes. Nancy Cook, former director of sales, became vice president of administration. Community publishing director Jeff Nearing became vice-president of custom and community publishing (more on that in a minute). It was a deck chair reshuffling needed for the company’s future, says the president: “We have to make sure we have the right people and the right chairs.”

As long as you don’t look at the newsroom, the Herald’s business future seems bright. It’s been expanding in recent years. Through investment firm Brace Capital, Lever and his wife/boss Sarah Dennis (the paper’s publisher) have bought companies like Casket Printing and Publishing. It expanded its Cape Breton bureau to compete with the Cape Breton Post. It purchased community weeklies from TC Media last October, merging the products with its own. Online merchandise store Herald Shop has been rebranded, as has the Cream Careers job board. Throw everything at the wall and see what sticks, basically, to try and make up for lost revenues. Classified ads in the Herald used to annually bring in $12 million, paid upfront and often in cash. Now, that’s zero.

“We continue to make [the paper] as strong as it can be,” says Lever, “but to continue to think if you just put all your eggs in that basket and can maintain the same size and same employment that we used to, I think it is a losing proposition.”

National ad rates have fallen sharply in the last three quarters, and the business needed to recoup $2.8 million (half of that from the newsroom). Without the layoffs, Lever says, the paper would have shut down. “Would the Herald fold in two months if we didn’t make these cuts?” he says. “No, but it’s more about positioning us for the future.”

More and more, it seems that future contains “custom content.”

Custom content, AKA native advertising, AKA advertorial, is hot right now. Advertisements that look like articles are something the ad industry wants, and although they create a minefield for journalistic ethics, they’ve becoming an increasingly standard way for media outlets to help pay the bills. The Coast also produces stand-alone advertorial pull-outs, which are labelled as “advertising supplement” and written outside the newsroom.

At the Chronicle Herald, where “custom content” and “featured content” labels keep showing up in the daily paper, many in the newsroom are nervous about where the lines are being drawn.

Advertorial is what everyone’s doing and everyone wants, Lever says. Since the newsroom had pesky ethical qualms about that, the task went to the freelance-fed “custom content” group. It’s a neat trick. Advertorial content might violate the Herald newsroom’s code of ethics, but since it’s not produced in the newsroom that’s not a problem.

Readers may have noticed the colourfully rebranded community weeklies the Herald trotted out in the last couple of weeks (the Halifax Citizen, the Bedford-Sackville Observer, the Dartmouth Tribune). Though they usually feature straight-news stories, the weeklies are produced entirely within the sales department. It’s almost as if the Herald is growing a new newsroom—contract-free and answerable to advertisers. Meanwhile, its award-winning unionized workforce is slowly strangled. The union is also likely worried a cheaper stable of freelancers could be used as strikebreakers during next year’s contract negotiations.

“Freelance is obviously a very cost-effective way to provide content for our publications,” says Lever, but he stresses it’s not his long-term plan. The Herald’s freelance budget for next year will drop by some $50,000, meaning less work for everyone.

“Certainly we want to have productive and as many journalists as we can afford,” says Lever, “as long as they’re producing content that’s relevant to our readers.”

The focus has to be on “content creators,” he says. Meaning, outsourcing and automating everything else. The union’s already been told page editing will be outsourced in 2015, a move that will result in further job losses. The HTU plans to fight that, on jurisdictional grounds.

The “tough fact” of the industry is that “content creators” are more valuable for the Herald’s product, Lever explains. The rest, presumably, are superfluous. He’s proud to say the paper will employ 362 after these layoffs, an increase of 53 employees since the last reporter purge in 2009. That’s not in the newsroom, though.

“No, no, that’s enterprise-wide,” Lever says. “Yeah, so the newsroom is going to be significantly less.”

Still, with a $6-million newsroom payroll budget, he’s convinced there will be more people working at the Herald a year from now than there are today.

“They may be doing different things than people that are working for us today are doing,” he cautions.

One win for the Herald’s management has been the union concessions. A minor reduction in mileage pay, and a 1.3 percent increase in employee contributions to the pension plan are accepted. A two-percent pay increase is being deferred by way of a week’s unpaid vacation. Those are all preliminary bouts, though. The main event will be next November, when contract talks begin. If they make it that far.

“We will be losing 15 staff members,” says Bulmer. “That’s quite a large hit for the newsroom. Just in the first round of the early retirement, it was noticed. There was a struggle in getting the paper out.”

One question left is why the layoff list seemed so targeted. Most union contracts mean first hired, first fired. But the HTU’s deal says management doesn’t need to go by junior status when choosing layoffs. Bill Spurr, for instance, was chosen to be saved over Lois Legge. That’s despite Legge having 14 years of seniority on Spurr, and earning less money than him by way of a modified work week. So if not seniority, what criteria led the paper to deem some of the best reporters in their newsroom as expendable?

Skill sets, says Lever. He claims that without the original 20 employees named to be laid off the Herald could still produce a product best positioned for the company’s future.

There were no positions outside of the newsroom cut on October’s list of layoffs. Those sort of non-unionized reductions happen more regularly, Lever says; not all at once and not publicly.

Ian Thompson’s resignation was certainly public. The former Emera vice-president and provincial deputy minister was brought to the Herald by his niece Sarah Dennis in 2011 as associate publisher. That was just a few months before Lever was served up as the new president and CEO. Thompson wasn’t even two months on the job when, on December 1, the paper’s longtime publisher Graham Dennis passed away. Speaking in memorial at the time, Thompson noted Dennis died on the anniversary of “his proudest moment: the 1950 start of the pension plan for Herald employees.”

Three years later, almost to the day, and Thompson is stepping down. He told the newsroom this week he had always planned to stay for 24 to 36 months, counting time like some count their kids’ ages. He said he has no set plans for the future.

Like everyone else, the Chronicle Herald is struggling with the most recent death of journalism. The family-owned paper isn’t for sale, at the moment. Though, it’s not like anyone’s really out to buy a daily newspaper these days. For the newsroom, there’re still bigger storms on the horizon. Layoffs, farmed-out content, it all adds up. At what point do you cut away so much that you’ve got nothing left? I ask Ingrid Bulmer if she thinks the Herald will recover.

It won’t be, that much is clear.