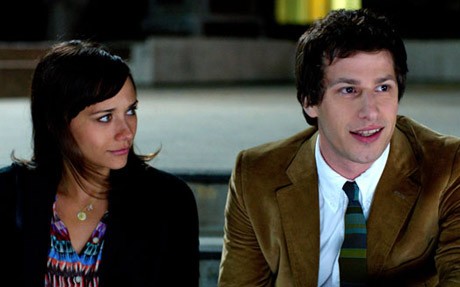 Though of pure Hollywood lineage and opportunity, Rashida Jones has instead taken a cue from her Parks and Recreation castmate Amy Poehler and made her own work, co-writing and starring in this sharp romantic comedy. After a beautiful opening credits sequence of their relationship, we meet Celeste (Jones) and Jesse (Andy Samberg, restrained) a few months into their separation. They're still as friendly as ever, sharing inside jokes, living space and a carpool—Jesse is just biding his time until she comes around, but Celeste can't plan with an Apatowian man-boy. Then Jesse discovers a one-night stand has produced a baby-to-be, and he dashes off to have the life he wanted with Celeste. She unravels. Though dotted with appealing faces like Ari Graynor, Elijah Wood and Will McCormack (co-writer and real-life Jones ex), Celeste and Jesse Forever is really Rashida Forever, and she acquits herself nicely in a complex leading role. Many points also to director Lee Toland Krieger, DP David Lanzenberg and editor Yana Gorskaya for crafting an intimate, cool, interestingly assembled picture, hard to do with a talky feelings indie.

Celeste and Jesse Forever is not showing in any theaters in the area.