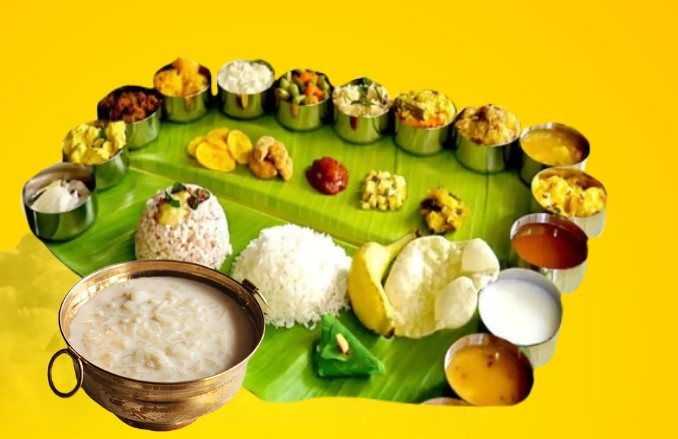 Masala Delight
Onam sadhya is a traditional meal from Kerala where more than 20 dishes are served on a banana leaf.

Indians from Kerala and the Malayalee community will be celebrating the final few days of Onam this weekend, and Masala Delight wants people in Halifax to try a traditional meal called sadhya.

Sadhya—which means feast—originates from Kerala, a state on India’s southwest coast. Traditionally, it consists of 26 dishes that are prepared with more than 60 ingredients; it’s served on a banana leaf, people typically eat it with their hands and it’s only served during Onam.

Deeksha Bhaskar is the real deal: The up-and-coming restaurateur and her father focus on quality and authenticity at Rasa Flavours of India.


Masala Delight owner Libu Babu says that “for vegetarians, it will be a treat” since none of the dishes have meat or fish. He says it’s a popular feast among Indians because it’s full of flavour and offers a variety of dishes such as fried vegetables, pickled foods and curries.

From Friday, August 20 through Sunday, August 22, Masala Delight will be serving (by reservation only) a 21-dish sadhya between 11am and 4pm. Each feast costs $17.99, and it’s full of traditional dishes from Kerala.

This year, Onam began on Aug. 12 and ends on Aug. 23. It’s a 10-day harvest festival and it’s one of the three major festivals in Kerala, the other two being Vishu and Thiruvathira.

Based on Hindu legends, Onam commemorates King Mahabali who Babu says was well-loved by Indians in Kerala. Mahabali was known to be generous and kind, and his reign is considered to be Kerala’s golden era. Hindu scriptures suggest that Onam is the grand annual homecoming of Mahabali.

He’s believed to be the descendant of Kashyapa who’s a revered Vedic sage in Hinduism. In the religion, Mahabali is also considered to be one of eight immortals in a group called the Chiranjivi.

During the 10 days of Onam, there are usually several other festivities on top of sadhya including boat races, traditional dances and the creation of flower mats.

For those who are trying Masala Delight's feast this weekend, Babu says he’s happy to share more information about the festival and walk people through the various dishes served for sadhya.