CeaseFire Halifax calls for a cure to recent violence

With the city still reeling from two murders in less than 72 hours, CeaseFire Halifax gathered together with local residents and community activists at a public rally Thursday evening in an effort to try and stop the violence.

Halifax’s anti-violence intervention non-profit organized the event at Squiggle Park, on the corner of Falkland and Gottingen streets—a stone’s throw from where one of this week’s shootings took place. Members of the African-Nova Scotian community, including pastor Rhonda Britton of the Cornwallis Street Baptist Church, led the crowd of around 45 people in prayer and chants against the recent wave of violence.

“We need to cure violence because it is a disease,” Britton told the assembled crowd. “It is an insidious disease that gets into the hearts and minds of people and it has a domino effect...When one act happens another one comes behind it.”

CeaseFire project manager Mel Lucas said his group has responded with shock and sorrow at the recent incidents.

“It’s traumatizing to have something suddenly happen to a family member or friend and when all of the sudden someone’s life meets an end due to violence it’s more traumatic still,” he said Thursday evening. “It eats at the fabric of people and their hearts. It’s a terrible thing.” 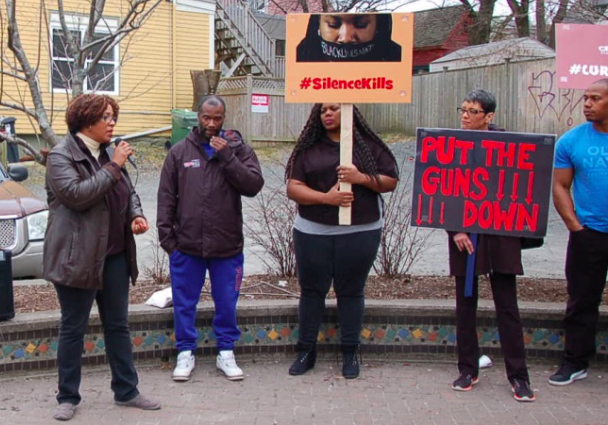 CeaseFire volunteers passed out signs at the rally calling for an end to violence. Passing cars honked horns to show support. Halifax police also made a presence, engaging with crowd members while vehicles circled the block before, during and after the rally. Attendees were encouraged to come forward and share their feelings about the recent shootings and how the violence is affecting the community.

“We cannot get back people who are lost by killing other people,” said Britton. “Every life is valuable and we need somehow to drive that message home.”

Another event, a Stop the Violence march led by activist Quentrel Provo, will take place Sunday afternoon and is expected to draw a higher turnout of community members, north end residents, police brass and elected officials. The march starts at 4pm on the corner of Novalea and Duffus streets and ends at Grande Parade in front of City Hall.