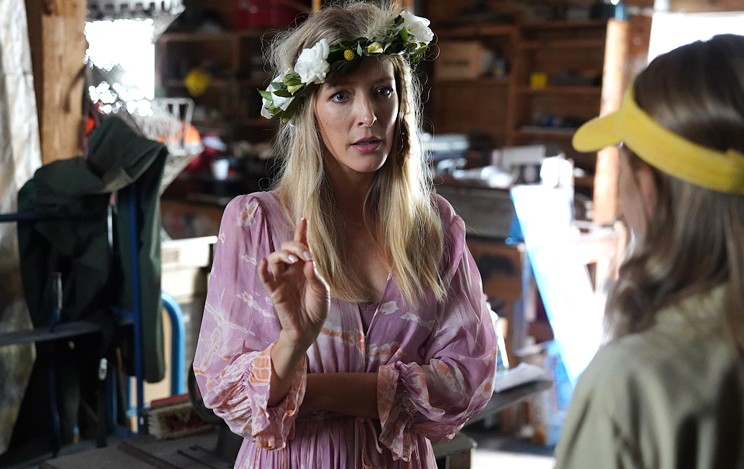 CBC
Jennifer Finnigan plays a familiar character in Moonshine, the sibling who left Nova Scotia and causes chaos by returning.

Dysfunctional is probably the best way to describe the Finley-Cullen family. It’s a clan that includes five adult half-siblings, each of whom have eccentric personalities and backgrounds that don’t quite mesh well together. Throw in a late aunt’s will that divides up her personal belongings amongst the clan—including a significant chunk of shares in the family-owned ramshackle summer resort on Nova Scotia’s south shore—and there’s no question why there’s a sibling war. In Moonshine, we get front-row seats to this rowdy conflict and drama.

It only intensifies when one of the siblings, Lidia Bennett, returns to Nova Scotia after leaving home, getting married and moving away from the province. Once she’s chosen by the aunt to inherit her shares of The Moonshine resort, a bit of chaos—for everyone—ensues.

Jason Priestley on the Fitz: Jason Priestley trades in the Peach Pit for a used car lot in the Annapolis Valley and a raunchy new cable series, Call Me Fitz.

“I think for Lidia specifically, she’s been away, and she’s had another life somewhere else completely,” says Jennifer Finnigan, who plays the character and might be recognized from The Bold and The Beautiful. “A lot of that involved her being in denial about what her past was, and creating a wall between her and her family.

“This is her breaking down this wall and trying to prove to them that she can be different, she can be back. She’s relearning not just who she is but who they are.”

In Moonshine, it’s not just the relationships between the siblings that’s a point of contention. There’s a large emphasis on the connections each sibling has towards whether or not they’ve left their seaside home and The Moonshine resort. “It’s a little bit magical, the sort of power that The Moonshine has over the personal relationships and them as individuals,” says Emma Hunter, who plays sibling Nora Finley-Cullen.

As a province, Nova Scotia also plays a large role in driving the story and influencing the entire CBC TV series. Moonshine, which premiered on September 14, aims to stay true to the south shore, with its small-town aesthetic and lineal history. Throughout the show, people might catch glimpses of familiar local businesses or locations such as Hubbards Cove FM radio station and the famed lobster supper spot of The Shore Club.

Moonshine is heavily fictionalized, but it’s still a little autobiographical. What CBC describes as a “raucous east coast tale of lust, legacy and lobster” was created by screenwriter and director Sheri Elwood, who grew up splitting her time between Ontario and Nova Scotia. Her mother’s home is just nearby the series’ set as well as Hubbards Beach Campground and Cottages which Elwood’s family owns; Elwood also comes from a large family of four other half-siblings and three blood siblings.

“Nova Scotians are so open and so down-to-earth and I just adore them,” says Elwood, who also created Call me Fitz. “There’s stuff here that flies that, maybe, a lot of cities did away with 20 years ago.

“There’s a lovely, raw time-capsule quality.... It’s just so nice to go to a place where it’s not so precious and we can all just be our raw selves against the sea—I would love to live here.”

Moonshine’s entire crew is local, while nearly all of the cast is Canadian including Anastasia Phillips, Alexander Nunez and Tom Stevens as the other siblings, as well as Corrine Koslo and Peter MacNeill as the parents. Season one of the series was filmed last summer—when the show was originally called Feudal—while season two is currently in production until October. “We’re trying to keep it local,” Elwood says. “We’re trying to keep it all in the family.”