On their new CBC show, Picnicface alums Andrew Bush and Mark Little bring their weirdo energy to a small town. 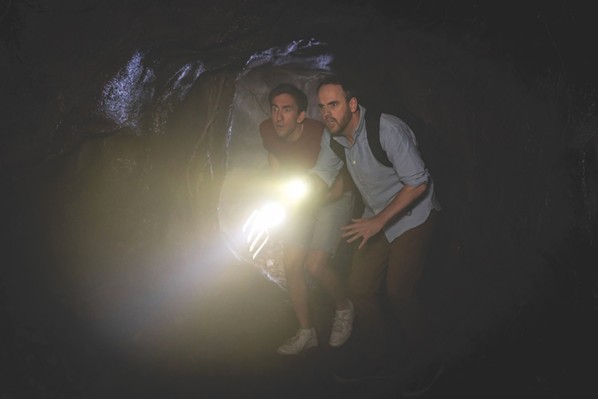 CBC
Little and Bush on a small-town adventure.

“The goal was to piss on Cavendish and everything they believe,” says Mark Little. “It’s government-funded revenge.”

His new sitcom Cavendish, premiering January 8 on CBC, stars Little and former Picnicface colleague Andrew Bush, also executive producers The show revolves around the adventures of Andy (Bush) and Mark (Little), brothers who return to Cavendish, Prince Edward Island, after years of living in Toronto. Upon their homecoming, they discover many strange oddities—an Anne of Green Gables cult, a 200-year-old coven—that were not part of their big-city experience.

“The idea stemmed from me going there on vacation,” says Bush. “Mark and I were working on ideas for shows, and I told him some vacation stories and Mark was fascinated. It’s not depicting Cavendish proper—it’s basically taking small towns and small-town superstitions and ramping it up to the nth degree.”

In the works since 2012, Cavendish was a part-time pursuit for Bush and Little, who were busy juggling other projects: Bush worked for Funny or Die and directed the feature Dirty 30, while Little wrote for children’s shows like Cupcake & Dino and played Simon Hunt on Mr. D.

“It wasn’t in constant development,” Bush says. “Sometimes we’d think it was dead and it would come back into our minds. The first time we thought it was really going to happen was 2016. We rewrote two episodes on our own—it was initially more of an ensemble show—and focused more on the brothers and the spooky elements. It piqued CBC’s interest, and production company Temple Street came on board in 2017.” Cavendish shot around Halifax and PEI last summer.

The show’s humour comes from Andy and Mark’s reaction to Cavendish’s strangeness: Andy with guarded pessimism, Mark with gleeful enthusiasm. It’s a dynamic honed from years of working together—Bush and Little collaborations date back to 2006, when Picnicface regularly performed sold-out sketch shows at Ginger’s Tavern—but Bush says the characters are not exaggerated versions of their own personalities.

The cast also features some big names in the sketch and improv, including British comedian Kevin Eldon (Big Train, It’s Kevin) and Kathy Greenwood (Whose Line Is It Anyway, Women Fully Clothed).

“Working with them was amazing,” say Bush. “We knew their work—Kathy from Whose Line Is It Anyway, and Kevin from immersing ourselves in cool British sketch shows. Everyone had a live performance background, so they could use the script as a skeleton and just play around a bit.”

“We’re not giving them writing credits, though,” adds Little.

This is Little and Bush’s second time working on a television show together—they produced 13 episodes of Picnicface for The Comedy Network in 2011—and their first as executive producers. While their prior experience made the Cavendish experience slightly easier, starring in and producing a show brings its own set of challenges.

“Cavendish was easier because we knew how it worked, and it was a different narrative structure, instead of running around all over the city filming sketches. And being executive directors gave us the ability to execute our vision,” says Little. “I’m not saying it’s a perfect execution, but this is our show, it’s what we pictured more or less, and the producer role gave us the power to see if we could do it. But it was really hard, a lot of work, and if it sucks it’s definitely on us.”

That said, Little and Bush agree that CBC endorsed their vision, even if the end result is different from what you’d typically expect from the Mother Corporation.

“Each episode is like a mini-movie, and we completely swung for the fences,” says Bush. “CBC was more than supportive.”

“Some of the notes we got back were completely unexpected,” adds Little. “Instead of toning us down, it was like, ‘Did Andy stab the child clearly enough?’”

Cavendish’s first season runs eight episodes; both Little and Bush are hopeful that audiences across the country will enjoy their creation. But if any Islanders take offense, Little isn’t pulling any punches.

“Screw you, PEI,” he says, laughing. “Come across the bridge and face us if you don’t like what you see.”