Archdiocese of Halifax-Yarmouth
A tiny shelter is under construction at Well Engineered Inc. in Burnside.

The church is fundraising to construct them all by December 24.

Last fall, when Roman Catholic archbishop Brian Dunn moved into his position, replacing longtime archbishop Anthony Mancini, he wrote a pastoral letter outlining four priorities for his sphere of influence, the Halifax-Yarmouth archdiocese. Three of those are very specific to church affairs, including the religious teaching called catechesis. The other priority is homelessness.

“It was a real awareness of recognizing that there are lots of people who are homeless here in the area,” says Dunn, sitting with John Stevens, a project coordinator for the church, at a table in a room deep in the offices of the archdiocese on Brunswick Street in Halifax. “And so we worked on that, we asked parishes to give a report on that priority and discovered that lots of parishes are involved with feeding the homeless or food banks.”

The archbishop would look like a lot of middle-aged corporate middle managers, if it weren’t for the immediately recognizable white collar and large cross hanging from his neck. But his way of speaking is measured and level, the result of many sermons given and lessons taught.

“From then on we’ve been working on this,” Dunn says, fiddling with a ring on his right hand. “Last year we had one tiny shelter in St. Ignatius Parish in Bedford, and that was very successful, so we thought we’d extend the program this year.”

That shelter was built by Halifax Mutual Aid a largely anonymous organization that has built crisis shelters across the peninsula since last winter. The HMA shelters are built by volunteers in less than two hours for just $1,400 of supplies, but include no heat, electricity or plumbing. “It wasn’t approved, we just did it,” says Dunn of last year’s shelter.

For this winter the original plan was to build 15 to 20 more HMA shelters, but municipal officials quickly quashed that. “We met with a councillor, the councillor gave us a whole list of regulations we need to use,” says Dunn. The city has previously said that the shelters built by HMA are not up to code, citing fire and safety concerns.

When asked if HRM staff threatened the church with fines if they built more HMA shelters, the archbishop nodded his head and looked to Stevens. “They outlined their concerns about the shelters,” says Stevens, coordinator of the shelter project. “And did remind us that there are fines for structures that aren’t put up with the proper things in place.”

But the church continued working and went about things the official way. “We worked with the town and finally came up with a design that they accepted and supported,” says Dunn. 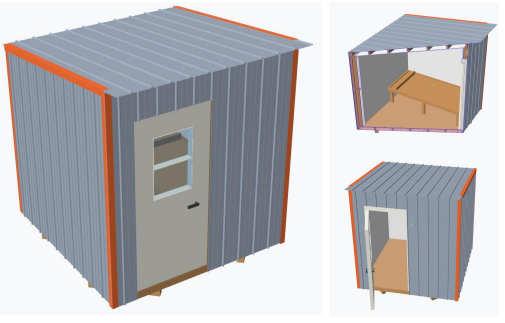 Well Engineered Inc.
A digitally rendered version of what the church shelters will look like.

The approved units are designed and built by local company Well Engineered Inc., based in Burnside. They include steel siding, pitched roofing and waterproof flooring. The interior will be painted.

“These shelters are larger than an HMA shelter, they have an 8x8 frame, bunk bed built-in,” says Stevens. “But I think the big thing would be outside finish and electrical.”

There will be one small outlet in each tiny shelter, enough for a USB outlet, a light, a smoke detector and a heater. “We’re just taking electrical from the church or whatever’s nearby,” says Stevens.

But being larger and safer also comes with a price tag. Each shelter costs $11,500 for materials and construction. To pay for them, the church is beginning a massive fundraising drive via its website, something Dunn hopes will see an outpouring of support.

“We really need to put it out to people to say, ‘Here’s a project where you can be involved and donate whatever,’” Dunn says. “It’s a real practical way to make a donation.”

Dunn says the church is now working with the city and downtown councillor Waye Mason to fast-track permits so the shelters can be ready by December 24. The plan is to have 15 to 20 different shelters at eight different churches around the city. Some churches may have just one shelter on their property, and others may have several.

“I think a lot of our churches are interested and willing,” says Stevens. “We just need to dot some I’s, cross some T’s, before we announce where everything is going to be.”

Shelter occupants don’t need to be Catholic, and can contact the church directly or through a service provider. The only requirements are those listed in the occupant agreement listed on the church’s website.

While the provincial government isn’t involved, Dunn says there may be shelters built at parishes across the province, as the archdiocese spans from Halifax to Yarmouth.

These shelters are not a permanent solution; in the spring, they will come down. “We recognize that it’s very temporary, it doesn’t deal with the hundreds of people that are homeless here,” says Dunn. "We need some long-term solutions.”