The artist of Cree and Metis ancestry is working on a beaded tribute to the Shubenacadie River, “to start a conversation through making.” 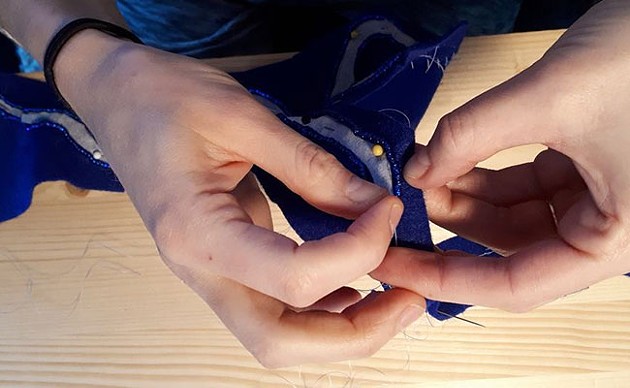 Public beading circles
Treaty Space Gallery, NSCAD University Port campus
1107 Marginal Road
February 20, 27, March 6, 13, 6-9pm What does it mean for a place to be called home? It’s a question that’s become inescapable for interdisciplinary artist Carrie Allison. Living in Halifax for several years after being raised in British Colombia and tracing her Cree-Metis ancestry in Alberta, a case could be made that home, for her, is any of the three.

Her latest project, though, sees Halifax being chosen—at least for now, at least in some ways—as the artist begins an ambitious beadwork project at the NSCAD Port Campus’ new Treaty Space gallery: A lifelike tribute to the Shubenacadie River, “to show solidarity with local Mi’kmaq, to show solidarity with the water protectors, to situate myself within Nova Scotia,” she says. “It’s about building community but also starting conversation through making.”

It’s the latest in a trio of waterways Allison has painstakingly reconstructed, beading geographically correct swaths of blue, based off Google Maps, to commemorate certain waters. “For the past year, I’ve been teaching myself how to bead with these long, endurance beadings,” she says. “I wanted to teach myself how to do it to reconnect.” (The other rivers she’s done are the Fraser River in BC and the Heart River in Alberta).

This time around, she’s not doing the beading alone: Allison is opening the project up to the city, with a series of four Tuesday sessions, starting February 20, seeing Haligonians help create sections of the Shubenacadie River.

“A lot of my art practice is rooted in themes of identity and reclaiming and trying to reconnect—and a lot of that stems from my grandmother, who went to residential school, so we were really cut off from a lot of knowledge that’s normally passed down,” Allison explains. “With Canada 150 passing and Indigenous people being here since time immemorial, I’ve been thinking a lot about visiting and how even if you own property here, essentially you’re just visiting, if you look at the grand scale of time. That’s one of the things I want to bring up during the beading circles: Standing in solidarity with the people here, but being a respectful guest.”