Get to know the chef behind downtown Halifax’s swanky new spot, The Exchange on Hollis. 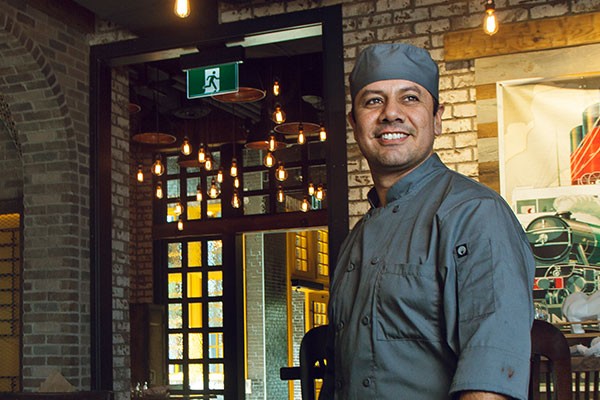 Lenny Mullins
“You know, the beauty of being a chef is that you get to touch on a lot of things,” says Carlos Bonilla. “Everything that I’ve done is because I love this business. Anything that can help you grow in the business, and help you get better, is just a plus.”

Bonilla is the head chef at The Exchange on Hollis, a new-this-summer restaurant serving up international cuisine, and he knows his stuff. He’s completed four diplomas, worked all over North America, written a culinary blog and published a contemporary Mexican cuisine cookbook, Five Courses. Originally from Mexico, Bonilla first came to Nova Scotia on a student visa and studied architectural drafting at NSCC. He wanted to learn how to better design kitchens before stepping into the next stage of his career.

Bonilla realized his passion for cooking decades ago when he was a teenager. His first introduction to the biz was working at a fast food restaurant in Mexico City where his interest in the industry was sparked. In his final year of high school, Bonilla’s family moved to Detroit and he enrolled in his school’s home economics program. It took three weeks in that class for him to decide his career path, and he hasn’t looked back since.

“It is a different world, a really exciting world. And that’s kind of what pushed me into it,” he says.“The ambience inside the kitchen. After that, I didn’t drop it.”
In May, at the same time that Bonilla and his family were granted their permanent residency in Canada, the opportunity at The Exchange arose. “If I were to write my book, it would be called Chance,” he says, laughing.

“It was incredible timing, you know some things are just meant to be I guess.”
Walk into The Exchange any time of day and you’ll see how big its operation is. At on a Friday, half an hour before opening time, there are 10 or so cooks scooting around the spacious kitchen, and they’ve already been at it for a few hours. The restaurant itself is enormous—265 seats, three private rooms and a large, well-stocked bar—and it’s buzzing with servers preparing for their shift. On any given day, The Exchange will have about 22 people in the kitchen and 24 servers and bartenders out on the floor.

The menu is also extensive. It’s the work of Bonilla and the restaurant’s general manager Andrew Flynn with a few dishes borrowed from its sister restaurant— St. John’s Fish Exchange—in Newfoundland.

The culinary concept is “international food that revolves around the north Atlantic and the trade route within the Atlantic Ocean,” says Bonilla. There’s a focus on Nova Scotia, but also Spain, Great Britain, France with some Creole influences too. The menu offers several “social plates” to be shared (with highlights like grilled octopus, chicken lollipops and donair croquettes) and “casual/handheld” items (think tacos and burgers), in addition to its many entrees and pasta. You can also add a lobster tail to any dish.

Bonilla thinks he’s come to Halifax, and the bustle of The Exchange, at the right time.

“I think it’s an up-and-coming city culinary-wise,” he says. Originally, his plan was to eventually head to Toronto but now that Bonilla has worn his apron here, he doesn’t see himself leaving anytime soon.

“The way that Halifax is growing culinary-wise, you want to be part of it.”