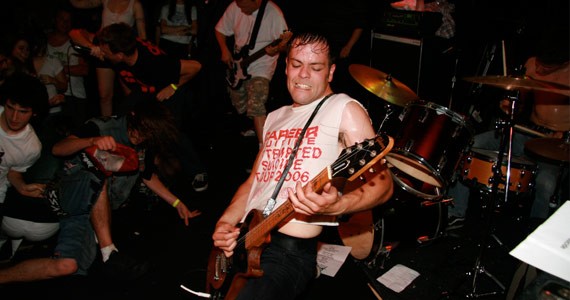 Career Suicide's last Halifax visit was raucous and unforgettable, resulting in a bit of broken glass, a lot of hoarse vocal chords and a long-lasting feeling of punk satisfaction. For a band that's been around since 2001, longevity is second nature. Considering that drummer Dave Brown lives in Halifax and guitarist Jonah Falco is busy playing drums with Fucked Up, the simple fact that CS hasn't called it quits out of convenience alone is an impressive feat.

There were a few line-up changes throughout the years, bringing with them new blood and new convictions, but things in camp CS have been steady rolling for the past eight years, with the exception of Jon Sharron from Brutal Knights joining the roster on bass.

"When it all boils down to it, I think it's mostly due to the fact that we're all on the same page about how we want to operate as a band and that we get along with each other as well as we do. We're all busy guys with only so much time to devote to playing and recording with CS, but we still manage to get in a few shows a year, the occasional release and an actual tour every now and again. I'd say we're content with that," says Brown. "I've been in Halifax for about three years now but honestly, we were doing just as much as when I was living in Toronto. Thankfully though, we're in a position where we can make it work with me being out here."

The band does more than just make it work, with wildly successful tours taking its members all over North America, Europe and Japan, getting their 1980s punk-influenced sound in front of fans that know all the words is something the band considers a career highlight.

"To play this type of music for people that not only like punk and hardcore, but also are really into your band is without a doubt the most rewarding part," says Brown. "The highlights, the places we've been, stories we have, characters we've met, they all come from that and are the reason why we have such a great time doing this."

But Brown claims it's not all been roses: "We messed up an Angry Samoans cover so bad in Germany last year that the local police actually issued us a fine."

I've come close to issuing a fine that there hasn't been another full length since 2007's Attempted Suicide, because I'm entitled like that.

"We don't have anything planned but that's not to say that we won't have something else in the future," says Brown. "I think we'd all like to have something new on the horizon; it's just a matter of us getting together and writing some new stuff."

In the theoretical book I'm writing about Canadian hardcore, Career Suicide would take an entire chapter. It would involve a lot of recounting particularly wild live shows, because the shows are where the magic happens. "When a kid comes up to you after a show with their face split open and is still telling you that they've had the best time of their life, that's saying something about how dedicated some of them are to what we're doing," says Brown. "If people are still listening to CS stuff 30 years down the road, that would be the best thing that I could imagine coming out of all this. I just hope we're not still playing then."