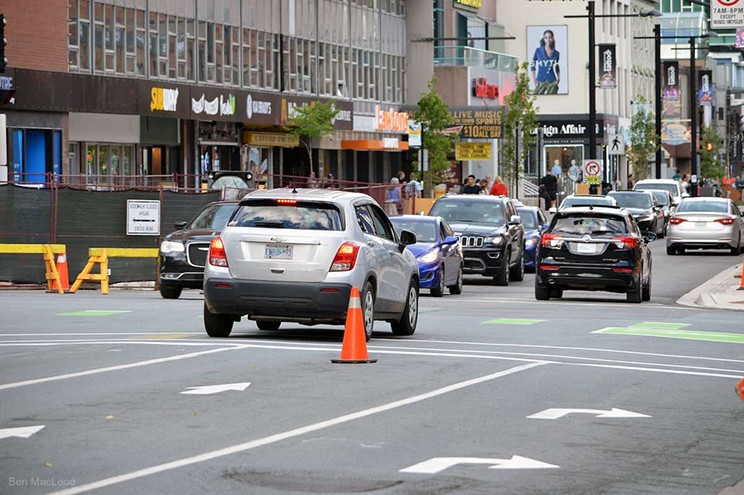 It was an ambitious project that started one Monday in July, and was supposed to continue for nearly a year. But in spite of untold hours of public servant labour spent on planning, it didn't last one week. At the time, the city put on a brave face, talking about regrouping and trying again soon. However, at today's special meeting of Halifax's transportation standing committee, the dream of having a pedestrian- and transit-only Spring Garden Road was officially postponed to next spring.

“Why are we back here today? Because it didn’t go well,” said city staffer Mike Connors in his presentation to the transport committee. Connors told the committee the car-free Spring Garden pilot project was an initial failure for various reasons. One of these is that the Halifax Regional Police didn’t fill shifts due to staffing shortages; Conners said that’s okay because it’s impractical for HRP officers to be onsite enforcing these restrictions.

Armed guards in the bread aisle: Halifax Regional Police are moonlighting as security at Atlantic Superstores around the city

It is unclear why Halifax’s municipally controlled police force has enough cops to send off-duty officers to Superstores to enforce federal laws, but does not have enough to enforce bylaws mandated by the government that holds them directly to account.

“This is good learning for us,” said councillor Waye Mason, who, in a standard procedural process, temporarily abdicated his position as chair of the meeting to diplomatically lambaste city staff. “I hope the traffic side of the house and sign side of the house is learning from this, because we’re going to need to take a stricter approach across the board on a whole bunch of things.”

The most recent report on road safety emphasizes the importance and expansion of the Heads up Halifax campaign. The measure of success for the education campaign is how many people saw the promotional materials. The assumption behind it and the idea of “shared responsibility” is that drivers are equal road users, will see promotional materials and change their behaviour.

The Spring Garden pilot project should prove to staff this is a dangerous assumption to make. Drivers are using a one-tonne kinetic weapon. Unless they’re physically stopped, some of them will not follow signs or change their behaviour for weaker road users because they do not have to. One of the main premises of the HRM’s shared responsibility road safety plan has a fundamental flaw. That flaw increases the mortal danger pedestrians and cyclists face on our streets.

As a result, to go forward with excluding cars from Spring Garden staff have recommended using physical infrastructure that allows buses through, but not automobiles. The city of Banff uses such a thing, and Halifax transit has similar automated gates in Highfield.

Mason ended the meeting by amending the motion on the floor to ensure staff followed the direction of their bosses (council). Connors was “reluctant to put a date down” because it “depends on what we recommend,” but was “optimistic that something can be installed by spring.”

While advocating for his amendment, Mason chirped councillor Paul Russell who was worried about staff not having enough time. Mason pointed out that technically spring doesn’t end until June 21, so his amendment gives staff until 11:59pm on June 20, 2023 to make this a reality. Mason’s amendment passed, so spring 2023 should see the return of a pedestrian- and transit-only Spring Garden Road.