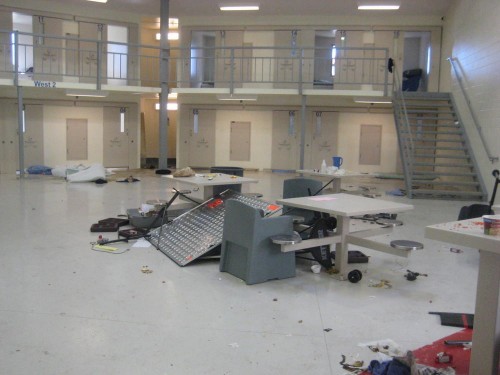 News95.7, via Department of Justice
Inside the Central Nova Correctional Facility.

How bad are things inside the Central Nova Correctional Facility? Understaffed, overcrowded hellhole might be the most accurate term.

The jointly-run federal and provincial prison has already been in the news for attacks on staff and inmates, now recent reports by CBC highlight one of the reasons Burnside is so barbaric.

“We almost always don’t have enough staff,” says one Burnside guard during internal Corrections interviews about the mistaken release of a prisoner back in December.

That inmate was released at 6am instead of 6pm. According to staff, the mistake was the result of minimal supervision. Five or six guards were supposed to be working that morning, but only two showed up for duty. The Department of Justice disputes that proper staffing levels could have prevented the mistake, however.

That last sentence is pretty rich, since Burnside has been “adding more people” for years now—cramming more and more prisoners into double-bunked cells. It’s one reason why the chaotic environment remains so unsafe for guards and inmates—inmates like Tyler Benedict.

The 19-year-old prisoner, convicted of robbery and break and enter, was nearly beaten to death in his cell after being transferred to Burnside, suffering a traumatic brain injury in the aftermath. The CBC, Elizabeth Chiu this time, reports that a month after the attack Benedict is still in a hospital bed.

At the time of the attack, Central Nova was over 80 percent full. The Northeast Nova facility where Benedict had just transferred from wasn’t even at half capacity.

Much was made of Northeast—the “new jail” near Pictou—when it opened earlier this spring. At the time, Sean Kelly told The Coast the jail’s increased capacity would relieve some of the pressure off Central Nova. Given what happened to Benedict, the pressure still seems to be flowing in the wrong direction.

Meanwhile, Northeast Nova remains understaffed even after the “largest recruitment drive in Nova Scotia Correctional Services history.” Not enough employees were found, and the jail is still trying to hire relief workers (while also patching up roof leaks in the two-month old, $42-million facility).

These are very real, immediate problems that need addressing in how this province and the federal government both house prisoners. Currently, legal challenges are mounting against the use of solitary confinement in federal prisons, and provincial facilities aren’t immune either.

Last month, Ontario’s government launched a review on the use of solitary confinement. The move came after a public report recommending the province overhaul its treatment of female inmates with mental illnesses. From 2013 to 2014, over 6,700 federal inmates spent at least one day in solitary confinement. As we’ve previously reported, there have been over 8,500 cases of solitary confinement in Nova Scotian correctional facilities since 2010 (with some cases lasting for months).

Solitary confinement is torture. Extended solitary confinement is a particularly brutal form of torture. Permanent psychological damage occurs after just 15 days. Yet it remains commonplace in publicly-owned and operated institutions. As an editorial in the Globe and Mail reads, Canadian corrections is “an overburdened system that appears to be increasingly reliant on solitary confinement as an inmate-management tool of first resort. This is a situation ripe for more tragedies.”

So far, Nova Scotia’s Liberal government has refused a third-party investigation into the conditions at the Burnside jail. What’s becoming clearer every day is that until someone steps in, inmates, staff and the province’s integrity will continue to be under attack.