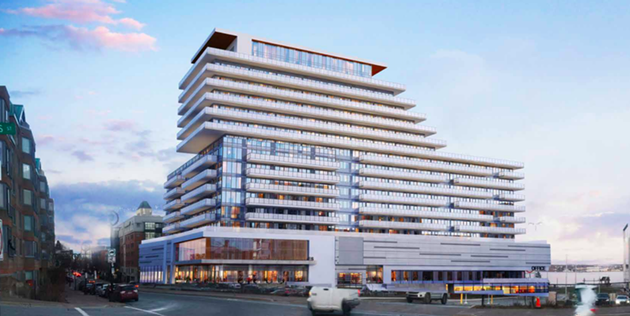 HRM
The proposed Cunard building would live in what's now a parking lot on the waterfront between Bishop's Landing and the Discovery Centre.

Remember what it looked like when Halifax's waterfront was stuffed with cruise ships lined up along the boardwalk? Then, COVID-19 came and the scene is a mere memory.

But, Southwest Properties has swooped in to save us all, with its proposal for a building that looks like half a cruise ship getting an "almost but not quite" approval from Halifax Regional Council this week.

Southwest Properties, helmed by Jim Spatz, is the developer behind Halifax buildings like the Maple the South Park Street buildings that house the new YMCA. Soon enough its newest project, ~The Cunard~ will be erected on the parking lot between Bishop's Landing (also owned by Spatz) and the Discovery Centre.

At this week's appeal hearing, council heard from staff, a very well organized group of community members appealing the building, the developer himself, the project's architect Stephen Bugbee and Matthew Neville from Develop Nova Scotia.

The meeting was taking place because back in the summer, a decision by Halifax's Design Review Committee was appealed by members of the public. At that DRC meeting, the committee approved eight of the nine variances Southwest had asked for—three more than the four recommended by staff.

A variance is what's needed when a design for a building comes forward with an element or elements that don't follow the rules of that particular planning area. This original design pushed the limits of the rules in nine places.

"The waterfront downtown plan is arguably the single most complex plan in HRM and there's a reason for that," said Councillor Waye Mason at the meeting. In 2009, it was decided that the waterfront needed to be treated with a higher level of care, added Mason.


A group of 23 citizens came forward to appeal the DRC's decision. Only 22 of those who submitted could actually appeal—you have to own property in the nearby area of a development to actually appeal it (meaning renters are entirely excluded from the process at this point).


The 22 appealers provided a masterclass in organization and presenting to council, each using their allotted five minutes to present their part of one large presentation outlining their problems with the development, from lack of attention paid to the real effects of climate change on waterfront properties, loss of sunny areas on the boardwalk, the ugly design, poor meeting organization and more.


After some debate where, as Zurawski noted, the traditional divide between "let developers develop" councillors and "we direct developers so it's better for everyone" councillors, council voted to uphold the appeal—which meant the project's initial approval from the DRC with only one variance needing to be addressed was nullified. But it was never their plan to send the whole project back to the drawing board as the appellants asked for.

Councillor Waye Mason then put a new motion on the floor, which would allow the project to go forward as long as it addressed three of the nine variances, which dealt with the size of the tower being too big and it made changes to the plan for the western Lower Water Street elevation—which the developers had initially said they couldn't do because of the slope of the hill.

The motion also voted to accept Southwest's offer for "public benefit" which it has to do under the new centre plan rules in exchange for some extra square footage. Southwest opted for "public benefit" in the way of LEED Gold certification for sustainable building practices to the tune of $138,039.

Council also passed this week a by-law which will set up a fund that can accept money as a developer's "public benefit" into an account that will be given to non-profits working on affordable housing. It's up to the developer to contribute to the fund, or do something themselves, like Southwest's sustainable certification or even public art.

Southwest will return to HRM with the modifications asked for in Mason's motion and from there either get approval and start building, or have to do some more tweaks to the design.

6 things you can do in HRM this Thanksgiving weekend