“Because I could,” explains District 12 hopeful. 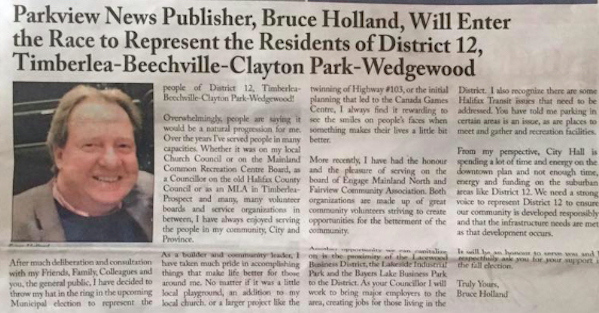 via Facebook
The June edition of Bruce Holland’s Parkview News, announcing his campaign.

There are five candidates currently running for a council seat in Timberlea-Beechville-Clayton Park-Wedgewood, but only one is buying ink by the barrel.

Parkview News publisher Bruce Holland recently used a front-page editorial in his own community newspaper to announce his candidacy for city council, and if that’s not journalistically unethical, it definitely strikes ones of his opponents as politically unfair.

“It certainly gives him a strategic advantage,” says Bruce E. Smith. “He can do what he wants. It’s his publication, and there are no rules on campaigning. So he’s quite free, I guess, to use his publication for his campaign.”

Both Bruces are candidates running for District 12 in October’s election. Smith is a former director with the Halifax North West Trails Association and used to have his own radio show on CKDU. Holland is a former county councillor, current executive director of the Spryfield and District Business Commission and ex-Liberal MLA for Timberlea-Prospect.

He’s also the publisher of the Parkview News community paper, which (according to its website) is distributed to 26,000 homes and businesses in the Clayton Park, Fairview, Bayers Lake, Rockingham and Clayton Park West communities and boasts a readership of “up to 70,000 per issue.”

Asked why he ran his campaign announcement in an above-the-fold, front-page editorial in his own newspaper, Holland is blunt: “Because I could,” he says.

“I’m sure any other candidate, if they had a newspaper, they would do that as well.”

Holland plans to keep writing and advertising his candidacy in the paper, and says he welcomes any of his opponents who want to buy ad space in the Parkview News. The publisher dismisses any charge of having an unfair advantage, claiming that Smith is just engaging in political “mudslinging.”

There aren’t many legal rules when it comes to the owner of a media publication using that outlet as a campaign tool to cover their own candidacy. The Municipal Elections Act doesn’t mention that particular scenario. Advertisements need a disclaimer that they’re printed on behalf of a certain candidate, but that’s about it.

Holland’s perfectly free to run all the editorials he wants, and use his newspaper’s Facebook account to publish photos of him glad-handing constituents—so long as he’s comfortable with the ethics of it all.

Another District 12 candidate with a slightly bigger platform than the Parkview News is putting self-imposed limits on his media promotion, though.

Richard Zurawski is a regular on-air personality for radio station News 95.7, where he offers meteorological forecasts and answers listeners’ science-related questions [Disclaimer: News 95.7's Sheldon MacLeod Show occasionally has me on as a guest about municipal issues].

Those topics don’t routinely cover city hall, so Zurawski says it will be “extremely unlikely” that he’ll mention his campaign over the air. He’s also not buying any campaign ad air time, due to the “obvious awkwardness.”

“I feel it would compromise both my personal integrity and journalistic ethics, as well as that of the station’s as a purveyor of quality journalism,” Zurawski writes in an email.

Bruce Smith, who first brought up the issue of Holland’s proclamation through several posts on local political Facebook groups, says he’s moved on and is now focusing on his campaign.

“You’re spending a lot of negative energy if you spend a lot of time fighting against the other candidates,” he says. “The people, in the end, will make up their mind who they want to support.”

Along with Holland, Smith and Zurawski, advanced-care paramedic John Bignell and retired Armed Forces member Scott Guthrie will be fighting for councillor Reg Rankin’s empty seat come October. The councillor of 25 years is not re-offering.