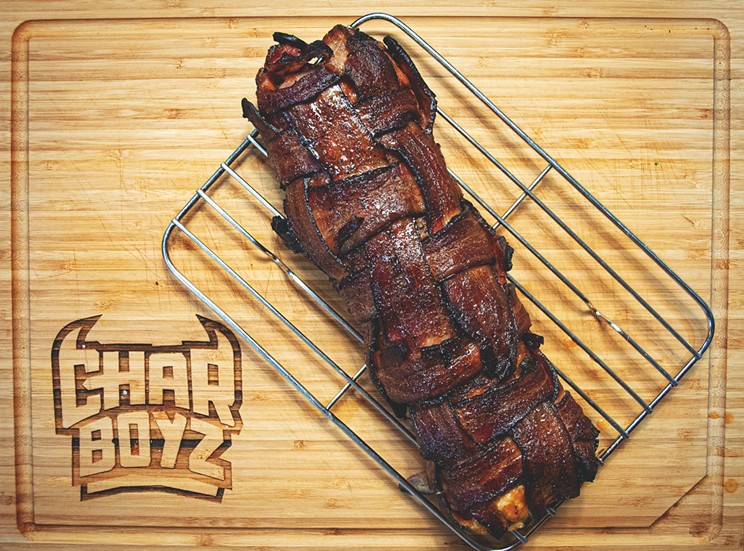 The Charboyz April delivery box will teach you how to make this braided beef masterpiece. SUBMITTED

Charboyz partners with local farmers to deliver monthly meat boxes with a twist.

Food delivery boxes have thrived during the pandemic. With grocery store trips causing anxiety and home delivery getting more convenient than ever, companies like HelloFresh and GoodFood are doing big business promoting healthy options, vegan options and quick, easy options.


When Jason Bourgoin saw the growing delivery market and decided to get into it, his initial idea was to be like a Nova Scotia-focused HelloFresh. But all that healthy, vegan stuff was just not what his company, Charboyz, was destined to be. “We’re really outside the box,” says Bourgoin. For example, the next Charboyz delivery drops around April 20—aka 4/20—so it’s got a cannabis theme.


Bourgoin lost his job as a safety officer in the oil and gas industry last spring when the pandemic hit, and spent a few months trying to find out what was next. Finally the former owner of The Battered Fish realized he wanted to go back to his happy place in the kitchen.


“I really missed food a lot,” he tells The Coast in a phone call. “I loved safety, it was a great paying job, with security and stuff like that. But as everyone was stuck home there for a little bit, you sort of reflected where you want to be and what you wanted to do, so I decided to become an entrepreneur again.”


The first Charboyz box in May 2020 was focused on bringing people together when they couldn’t be, and it included supplies and instructions for how to make barbecued ribs and burgers. “When we started off we were almost like a barbecue company, to be quite honest with you,” Bourgoin says. “We were like, everyone’s going to be out.”


But since then, the box has grown to be more about supporting each other, and partnering with other companies has become a major factor in the business for Charboyz. (Which, despite the name, is made up of the lone male Bourgoin on a team of women.) “The whole goal with us is we use everyone local. All local farmers, everything is local.”


Each month, Charboyz’ epic meal box includes enough food for about six people, complete with meats to grill, buns, spices and condiments. The meat comes from a number of Nova Scotian producers, such as Meadowbrook Meats, Oulton’s and Getaway Farms. The company has partnered with local bakeries like Stonehearth and 24 Carrots for black brioche and nacho cheese burger buns, and Big Cove foods for seasonings.


On top of that, each month has a special twist, like April’s 420-themed Cheech and Chong box.


“What we’re doing, they’re called barbecue fatties, like smoking a fatty. So we’ll use locally smoked bacon and we’re going to teach people how to weave it, and then we’re going to use some chorizo sausage that’s locally made, no preservatives or anything,” says Bourgoin. “Then you flatten that out on the inside of the bacon weave, then we’re going to use some fresh bocconcini, some pizza sauce from Maria’s Pantry, I’ve come up with a Cheetos dry rub to rub your bocconcini in, and right now I’m on the final stages of doing some kind of a maple kind of glaze or something on top of it.”


All this for $50 will give you and three to five friends the meat sweats (which is also what Bourgoin calls his beef-printed sweatpants suit) when it gets delivered to pickup locations on April 19 and 20.


In the past few months, Bourgoin says the meat boxes have developed a loyal following of “charheads” or “meatheads,” while he and his wife Katelyn await the arrival of their “charbaby” at the end of May. He says getting back into the food industry has been the most fun he’s had in a long time, and that’s what he wants for Charboyz customers too. “It’s an unbelievable experience. And you’re going to have some fun.”