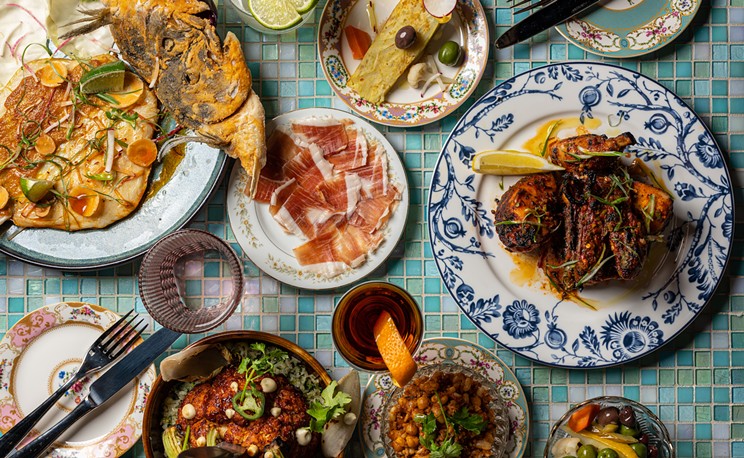 Chef Anthony Walsh married into an Argentine family about 25 years ago, but he still vividly remembers the first few times he tasted Latin American flavours. He recalls Argentine asado slow-roasted on a parrilla, and braised dishes that quickly warmed his heart. But there was one specific dish his mother-in-law, Elena Arevalo, made that profoundly impacted his culinary career: a taste of the Arevalo family’s Pollo Doña Aurora—chicken in a laurel, lemon and saffron braise—immediately woke him up as a young cook.

That essence of Latin American cuisine, flavours that immediately made him smitten, is the exact spirit Walsh wants to infuse at Bar Sofia. Opening February 18, the downtown Halifax eatery is the newest addition to the Queen’s Marque (1709 Lower Water Street) from Oliver and Bonacini Restaurants, and it aims to reflect the vibrant and fresh notes of Latin cooking. Walsh, who oversees the culinary direction of all O&B businesses as its corporate executive chef, says “it’s our love affair with all things Latin.”

One step into Bar Sofia transports diners into a bustling barrio, one that’s full of rich colour, lively plants and raw Latin energy. Designed by Halifax’s Breakhouse, the restaurant is split into two distinct zones: a 39-seat dining area and a high-energy bar. Inside, artwork from internationally-renowned Brazilian graphic artist Rafael Silveira—who specializes in pop art and surrealism—graces the walls. Come spring, Bar Sofia’s 88-seat patio will sit along a dynamic wall inspired by Vinicunca, or Rainbow Mountain, in Peru.

But like any restaurant, Bar Sofia’s soul lies in its carefully curated menu. One can expect a range of dishes that pull flavours from Latin American countries like Argentina, Chile, Venezuela and Brazil, to name a few. Walsh says not everything on the menu will strive to be “verbatim” classic Latin cuisine, but it’s full of selections he has found inspiring.

To start, Bar Sofia’s menu dons a wide list of hand-held bites. From housemade morcilla (blood sausage) topped with egg to beef empanadas made by Gaucho Pie Co. (Walsh’s wife’s bakery), there are rich starters for all diners. On top of that, a list of bold tacos—including options of mushroom birria, crispy haddock and lamb chorizo—are waiting to be savoured.

Many of the larger dishes, which are encouraged to be shared, easily steal the spotlight. An adobo-roasted cauliflower chaufa that’s brined for 24 hours in a mole-style sauce is described as “jaw-dropping” by Walsh. Grilled chicken covered in chimichurri sauce, à la plancha bream flavoured with aji amarillo peppers and a lamb chorizo verde burger slathered in piquillo pepper jam also sits on the menu.

That’s all rounded off with tasty, quick-bite desserts such as warm churros with a side of spiced dark chocolate as well as alfajores pastries that feature dulce de leche and coconut. With Bar Sofia’s food, Walsh says he doesn’t want to sell Nova Scotians short. Behind the grill, the kitchen staff is full of talented cooks, many of whom come from Latin America, including a sous chef from Rio de Janeiro.

7 food spots opening soon in Halifax to get excited—and hungry—for: From conch in Bedford to tacos downtown, Halifax is set to see a ton of restaurants that showcase flavours from across the world.

“Not that you need to be Latin to cook Latin because I don’t think that’s the case, at all,” Walsh says. “We all learn so much from being immersed in the culture or learning from other people. Food for me, it’s a language. Those kinds of things behind the scenes are really going to manifest themselves in the food, in the stories and in the authenticity.”

“I think the crux of it, the absolute baseline of things, is a deep respect for where the food comes from and hanging onto elements of different dishes,” Walsh says. “And doing your research, as well. Speaking to people and, obviously, a ton of cooking.”

Jessica Emin
Drinks will be cocktail-centric at Bar Sofia, with an emphasis on tequila and mezcal.

But at Bar Sofia, the drinks are just as important—and fun—as the food. Behind the bar, the menu will focus on cocktails, most of which will emphasize tequila and mezcal. Spicy margaritas, citrusy palomas and pisco sours are ready to brighten one’s night. There’s also a Latin-leaning wine program, highlighting affordable and accessible bottles from Spain, Argentina and Chile.

Bar Sofia is only the second of O&B’s Queen’s Marque restaurants, where Walsh says the company aims to have a total of 10 eateries open over the next several months. Some of those include Parisian-inspired Café Lunette, sub rosa speakeasy BKS and Asian noodle bar Toridori.

“I think we have a huge responsibility,” Walsh says. “We have a huge opportunity and I think the Queen’s Marque is a super important piece. I’m challenged by the enormity of the project in so far as how important it is to the city.”