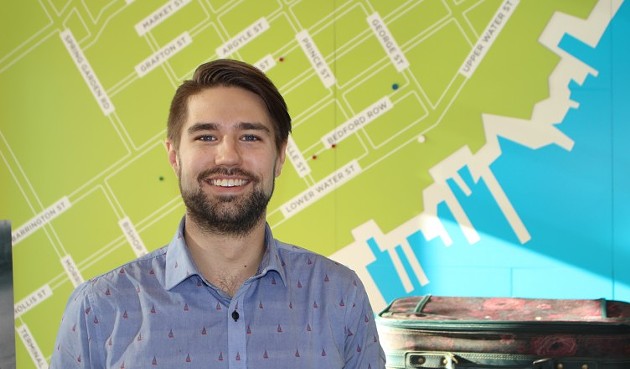 via Grace Kennedy and East Coast Post
Sommerhalder is currently marketing director for the Downtown Halifax Business Commission.
There’s still snow on the ground, but the political race for north end Halifax is heating up.

After two terms at city hall, Watts is not re-offering this fall. Her decision is in part an attempt try and make room for a more diverse council; less white, less male, less old.

One out of three ain’t bad, says Sommerhalder.

“I think diversity comes in a lot of different ways, certainly there's gender diversity, race diversity, background diversity, age. I definitely would be half the median age of council, so for me that would be one form of diversity.”

The director of marketing for the Downtown Halifax Business Commission is no stranger to municipal politics. Sommerhalder worked on Mike Savage’s mayoral campaign team back in 2012. Until recently, he was also a member of the District 7 and 8 Planning Advisory Committee.

Thx for this touching letter @hfxgov @YoungMC456. It was a pleasure and honour to serve the committee pic.twitter.com/VODmydStjB

Jennifer Watts says it’s still her “heart’s desire” for a more diverse council come November. The north end councillor didn't want to comment on any individual candidate, but she is encouraged by the number of people coming forward with an interest in municipal politics.

“It's awesome,” said Watts. “It's great to see there are all sorts of people generating interest, and it looks like there are going to be some good choices, different choices.”

Given the election is still over half a year away, it's a safe bet the ballot for District 8 isn't finalized.

“I already know of six or seven people who are likely to be in there,” says Sommerhalder. “It's going to be diverse in age and race, and I think that's a good thing for the district.”

On the phone with youth mentor Anthony Mrkonjic, District 15