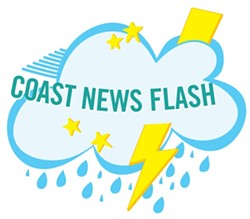 Halifax Police staff sergeant Mark Hartlen is appearing before the Police Complaints Commissioner this week, with an a five-day hearing scheduled. This morning, commissioner Nadine Cooper Mont would not allow reporters to enter the hearing room.

Hartlen was demoted from investigator to staff sergeant some time after a firm owned by Hartlen and fellow officer Darrell Gaudet were awarded no-bid contracts to conduct polygraph tests of prospective firefighters. Integrity Personnel Screening and Interviewing Consultants Inc. had been conducting the tests for 10 years starting in 1998, but the matter only became public in 2008, when Integrity collected nearly $115,000 without going through the city's normal tendering process.

Sources say Hartlen is contesting his demotion, and is bringing forward information he considers damaging to police management. Hartlen's attorney, David Bright of the Dartmouth firm Boyne Clarke, has not immediately returned a call for comment. Brian Palmeter, spokesperson for the Halifax police, declined to make public Hartlen's employment history, and referred all other questions to Cooper Mont. Cooper Mont has not returned a call for comment.