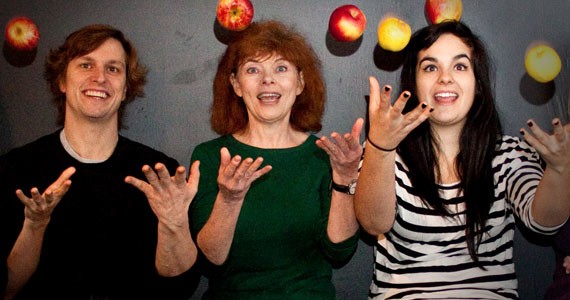 Hannah Rittner considers herself very fortunate. The 23-year-old recent King's College graduate has found her passion, and it's not what she expected.

Rittner pursued a degree in contemporary studies and English, but her ideas about her future changed after taking one course a couple of years ago taught by Martha Irving (actor and co-founding member of LunaSea Theatre Company, along with Mary-Colin Chisholm, Mauralea Austin and Sherry Smith). The connection fuelled her love of storytelling and led her to a career in playwriting. "I've always written," says the petite dynamo with a mile-wide smile. "But meeting Martha and discovering that playwriting was what I wanted to do was like being given the gift of happiness."

LunaSea commissioned the budding playwright to create a re-imagining of Chekhov's The Cherry Orchard, and the end product Estate opened at the Neptune Studio Theatre this week.

Estate is set at an apple orchard/artists' colony in the near future in the Annapolis Valley. It tells the story of Georgia McInnis (Mauralea Austin) and her struggle to keep the estate afloat in trying economic times.

"What Hannah has done is really lovely," says the play's director Mary-Colin Chisholm. "If you know The Cherry Orchard, there are lines, images and characters that echo the original, but it's a story that also stands on its own."

Rittner describes the play as a "dramedy," where the comedy portion comes from the absurdity of life rather than from a series of scripted punch-lines.

"I didn't set out to write either a comedy or a tragedy," she says. "I wanted to do whatever authentically served the story and the characters inside it. The hilarity just comes when the audience recognizes the ridiculousness of certain situations."

The seven-member cast's lone male is Michael McPhee, who plays Richard, a financial whiz who believes putting a development on the land would be the best solution to Georgia's fiscal woes. And while the temptation might have been to create Richard as the villain, both Chisholm and Rittner say that's not who Richard is.

"Richard is a character that is strongly connected to Georgia and incredibly confident in himself," explains Chisholm. "He acts on what he believes, but it's not that he's the bad guy."

Rittner agrees. "It seems to me that there are no villains in this play. I love all the characters equally."

Bringing Estate to the stage was facilitated by support from the Neptune Theatre Open Spaces program. The program, which is offered in collaboration with Theatre Nova Scotia, gives the winning professional theatre companies a free week's rental and technical support at the Studio Theatre.

"There's been a lot of support for small, independent theatre companies like LunaSea," says Chisholm. "And it's really humbling when people throw their talents at you."

Life after the Halifax production of Estate will be busy for both Rittner and LunaSea. Rittner says there has been some interest in the play from people in Toronto and she is also hard at work on several other pieces including a semi-autobiographical four-hander.

Up next for LunaSea is an "implosive" treatment of Henrik Ibsen's Ghosts.

"Offering that female perspective is part of our mandate at LunaSea, and another is to mentor and work with young people," says Mauralea Austin. "We're just really happy to be part of the evolution of a talented young playwright like Hannah."