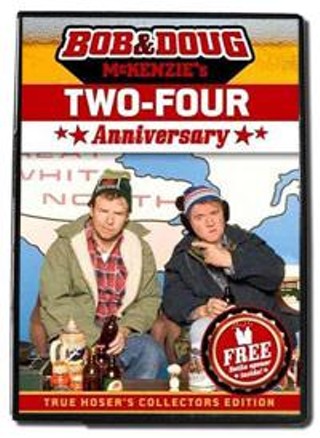 Bob & Doug MacKenzie’s Two-Four Anniversary
Henry Sarwer-Foner
Vivendi
Bob and Doug MacKenzie shot out of the SCTV womb 24 years ago as a middle-finger to CBC’s demand for two more minutes of “Canadian” content. Fine, you’ll get your toques and your beer and your back-bacon, and a Hinterland-inspired intro “Koo-loo-kookoo-koo-loo-kookoo,” too. And so two hosers were born.

This anniversary special is basic, straightforward fare with a Canadian twist---it’s hosted by ex-prime minister Paul Martin (it’s hard to imagine Stephen Harper in his retirement hosting anything other than some lame-o sourpuss conservative dinner)---a mix of comedic talking heads like Andy Dick, Ben Stiller and Tom Green, interviews and snippets of old sketches. Dave Thomas and Rick Moranis reprise their roles, but in the stiff new footage, Moranis looks puffy with age, and cases of Canadian are replaced with Red Cap (a rare stubby bottle left on the market) and there’s a barely disguised anti-drinking and driving message.

To really appreciate one of Canada’s best-known cultural exports, check out the features, including seven original sketches, commercial clips, plus audio versions of “Take Off” and “Twelve Days of Christmas.” Best watched with plenty of strange brew---or intoxicant of your choice---no judgment from this hoser.
Sue Carter Flinn