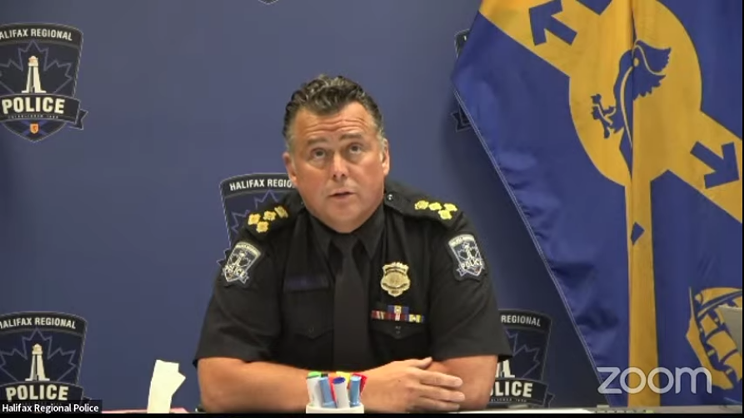 Plus Halifax is apparently okay with someone dying in custody to prevent officers being spit on.

Halifax Regional Police does, in fact, have a policy governing police moonlighting in grocery stores, but no one is allowed to see it—yet. It was brought up at this week’s Board of Police Commissioners meeting by city councillor/board chair Lindell Smith because of recent media attention.

The only available public policy on cops using taxpayer-funded equipment and training to protect food from being eaten by hungry people is available on Halifax’s website. The policy makes reference to HRP extra-duty regulations, and reads in part that the board “will continue to approve any extra-duty and off-duty employment” of HRP officers.

But when commissioner Carole McDougall asked at the Wednesday, September 7 meeting if anyone had read the extra-duty policy, it was revealed that no member of the police oversight body had done any oversight into their policy of unconditional approval of police doing extra-duty work. The consensus of the board in the meeting was that this was a standing policy the board’s members have accepted without question for years.

The Coast asked for the HRP’s extra-duty policy on July 22, 2022 but was instructed by HRP spokesperson Cst John MacLeod and Patti McKelvey, an administrator in the access to information office, that the extra-duty policy was not something that could be released without a $5 access to information request. So we submitted the formal request and fee under the provincial Freedom of Information and Protection of Privacy Act. On August 31, 2022 the HRP sent a letter to The Coast saying that releasing the extra-duty policing policy would require an extention until October 5, 2022.

The Coast also filed FOIPOPs for “Any and all emails between Loblaws/Superstore and the HRP as well as a copy of the contract between HRP and Loblaws/Superstore for the use of uniformed assets in stores,” “all contracts for private police services,” and “any and all internal and external emails mentioning or referencing police officers on volunteer extra duty or private police services contracts.” All of those access to information requests were refused by the police department because information on how public assets are used to protect private property could “reasonably be expected to endanger the life or physical safety of a law-enforcement officer.”

It apparently does not matter that cops protecting private property while off duty also could reasonably be expected to endanger the lives or physical safety of Halifax’s most vulnerable. In other words, guys with guns and body armour need protection and the HRM’s most vulnerable do not.

In other meeting matters, the board heard a motion from councillor Smith asking for a staff report on implementing recommendations from the Nova Scotia Police Review Board stemming from the 2016 death of Corey Rogers.

The recommendation to police is that they increase training around intoxication: how to spot signs of intoxication in the public, and how to deal with intoxicated people they interact with. This is because two cops, special constables Dan Fraser and Cheryl Gardner, were charged with criminal negligence causing death related to Rogers. They were convicted because they put an intoxicated Rogers in a spit hood and forged documents saying they checked on him. So they didn’t know he had thrown up in the spit hood and suffocated on his own vomit.

But the cops were cleared of negligence on appeal because, hey, mistakes happen and they were just following the rules of their workplace. In an email on Wednesday Sept. 7, 2022 HRP spokesperson John MacLeod said that this mistake can happen again because he “can confirm that spit hoods are available when required in our Prisoner Care Facility.”

And finally, the board got an update on a police matter that originated at Halifax Regional Council. The report was first introduced by councillor Tony Mancini, and asks for a staff report on whether or not having two police forces in the HRM—the RCMP and HRP—is best for the city. The police board heard an update from the private contractors Pricewaterhouse Coopers. The update was that the report will be coming to council in November.

Speaking of Board Of Police Commissioners , Halifax Regional Police (HRP)