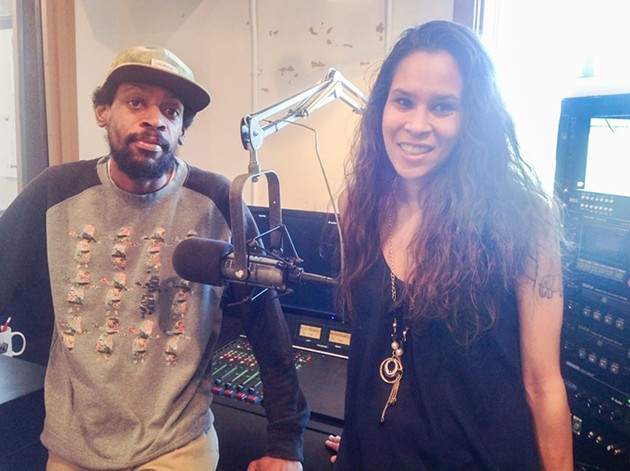 There might be a new poet laureate in town, but El Jones isn’t slowing down.

The educator, activist and HRM’s previous premier poet is already busy on Monday nights co-hosting CKDU’s Youth Now program, and now she’s spinning off of that with the Black Power Hour.

The new radio show offers a free over-the-air curriculum designed for Nova Scotia’s prison population (but open to all listeners). Jones says the idea came from Randy, an inmate who phones Youth Now, who had requested more historical black content. Each Wednesday afternoon BPH will have a lesson and discussion on a diverse range of subjects such as African science and philosophy, ancient Egypt, liberation movements and artistic histories.

“There's kind of the academic side, and then also stuff like music literacy, black music, jazz, conscious hip-hop, stuff like that,” says Jones, who premiered the program last week with co-creator iZrEAL Jones (no relation). [As a disclaimer, I should mention I worked with iZrEAL on a couple of small art projects several years ago.]

While Dalhousie recently introduced a black studies minor, and some universities offer community classes on a few of these subjects, the environments aren’t often racially inclusive, says Jones.

“I don't know that black people necessarily participate in a lot of those,” she says. “Also, if you're not confident in your literacy, I think the radio is a good way to get information to people that way.”

Her co-host iZrEAL says the show is designed to be feedback driven, and is hoping the listeners who call in will help drive the topic choices week to week.

“We're hoping that they'll start some of their own study groups and discussion groups, and come up with the topics that they want to discuss.”

It’s a way to strip some of the classism that’s inherent in post-secondary education and bring knowledge back to the people.

“I think it's really important we understand that universities don't monopolize knowledge,” Jones says. “It's a bit of a duty if you've had the opportunity to get educated and to participate in these spaces, to make sure you're also taking it out to other people. If you're asked to educate somebody, I think there's a sacred duty to that—to make sure we're passing on the things that we have.”

Black Power Hour can be heard Wednesdays from 1:30-2:30pm on CKDU (88.1 FM). Also, this weekend kicks off the independent campus radio station’s Spring Fring fundraiser. Check out some of the great events the station has lined up right here.