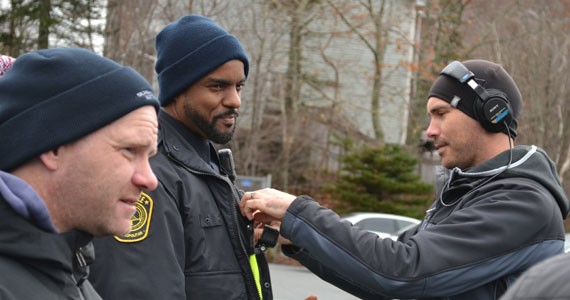 Filmmaker Cory Bowles says he likes to explore questions through his work.

His latest questions: What if a black police officer wanted to respond to systematic police violence? What if he did so by directing his frustrations at non-minorities?

Bowles' current project, Black Cop, touches on satire and humour as well as drama. It's based on his short film of the same name, which was featured in this year's Atlantic Film Festival.

The main character is, of course, a black cop. The film goes through a day in his life as he deals with the stress of a high-profile case of police violence. As a result, says Bowles, the officer is "pushed to the limit."

"That means he spends his day targeting the privileged community," Bowles explains, taking a short break during the sixth day of filming. "He assaults and harasses and goes on, basically, a rampage."

"He has to go through who he is as an officer, to who he is inside, to who and what he's actually fighting for," says Bowles.

Ronnie Rowe, who plays the title role, says the character's dimensions drew him to the script.

"He goes through such a big transition," says Rowe. "The issues that the film deals with is very relevant with what's going on in North America and the world."

Rowe describes his role as "a man that is struggling between his duty and his culture." He is "trying to find out who he wants to be with regards to those to things, because they're in such contrast."

Although the script has been flipped, Rowe feels the story is very true to life. "It hits home. Especially for me, as a young black man," he says.

One of the scenes shot last Thursday depicts a traffic stop, which eventually escalates to violence. Rowe doesn't find the physical aspects of those scenes challenging–he says the stunt coordinators and videographers make it easy.

From the outside looking in, however, the scene is pretty intense. So intense, in fact, just about everyone who drives by the set slows down their car, craning their neck to see what's going on.

"A scene like this will be bookended, or accompanied by, general commentaries that we would hear on social media, justifying our police officer," says Bowles.

According to Bowles, the film isn't meant to push any kind of "agenda." The goal is to "explore the psychological affect of institutionalized racism."

As for Rowe, he hopes people who watch the film will be able to put themselves in someone else's shoes and see things from a different point of view. "In order to fix things, we need to discuss them first," he says, "and I think this is a movie that will start discussions."