Black August North: “We don't pick and choose who gets human rights”

The protest inside the Burnside prison is now in its second week, despite denials from the department of justice. 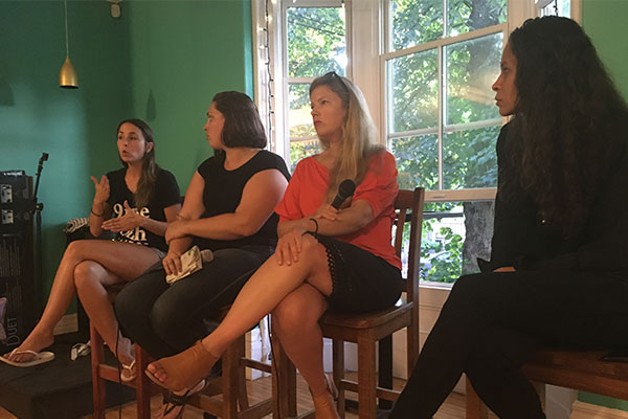 Bianca Mercer doesn’t sugarcoat the conditions she endured at the Central Nova Correctional Facility in Burnside.

“You can see the dirt on the floor and you’re in your bare feet. You feel ashamed.”

Mercer was one of four prison reform advocates speaking Monday evening at an open information session in support of the ongoing, non-violent protest by inmates at Central Nova.

The gathering was in solidarity with Nova Scotian prisoners who published an open letter two weeks ago announcing the protest, and listing demands such as better health care, rehabilitative programs, exercise equipment, personal clothing and shoes, food comparable to other jails, access to the library and a healthier canteen.

All of those items have previously been promised to them, reports El Jones for the Halifax Examiner.

“We wanted to gather people tonight so they can hear from people who’ve been in Burnside,” Jones told those assembled Monday evening at the Glitter Bean cafe. “Rights are for us all. We don’t pick and choose who gets human rights.”

The Nancy’s chair in Women’s Studies at Mount St. Vincent University was joined Martha Paynter, a registered nurse and chair of Women’s Wellness Within, Mount Allison University sociology professor Ardath Whynacht and Mercer, who now works as an advocate for the Elizabeth Fry Society.

Mercer lived at the Burnside prison for several months last year while pregnant. During her incarceration, she says she was forced to undress in front of male guards for her ultrasound and show them how to operate medical equipment to find the baby’s heartbeat.

The whole time Mercer was on remand, awaiting trial. While some at the Burnside jail are serving custodial sentences, inmates on remand haven’t been convicted of any offence. Despite this, Mercer says she was treated the same as a convicted criminal.

For years the number of remand inmates has outnumbered people in sentenced custody at Central Nova. It’s one of several longstanding, well-documented problems with the prison, ranging from an overuse of solitary confinement to untrained and unscreened guards, poor health care, unsanitary conditions and an unsafe environment for both inmates and guards.

Department of Justice spokesperson Sarah Gillis denied the existence of the prisoner protest last week, saying the jail is “operating as usual.” In an emailed statement to The Coast, Gillis states the province provides healthy food to inmates and has several rehabilitative programs.

But Paynter and the other panellists who’ve spoken with inmates say many of those programs have either lapsed or never existed in the first place.

“People inside are telling us, these things don’t exist,” said Paynter, who acknowledged there are some programs for prisoners that may be useful, but they “haven’t worked in years.”

“We’re spending more than $6,000 a month to violate someone’s human rights, re-traumatize them, deny them and ultimately make our communities less safe and they haven’t even been found guilty yet.”

On Monday, the NDP justice critic and MLA for Dartmouth South Claudia Chender put out a press release urging Justice minister Mark Furey to take action on the situation at Central Nova. The same day, told the room at Glitter Bean that the prison is a “black box” where nothing comes out.

“We can’t hear firsthand of the conditions inside the jail…[and] journalists can’t access the space. It’s really difficult,” she said. “We need to know what’s happening in there.”

The public is being asked to write to their MLAs and minister Furey about the prison protest. Organizers also collecting donations for inmates to use the prison phones and buy food from the canteen.

says she intends to bring the issue before the House, once the Legislature begins its fall sitting on September 6.

For those incarcerated with their babies, COVID-19 puts two generations in peril