There’s little the community can do to stop new developments pricing residents out of their own neighbourhood. 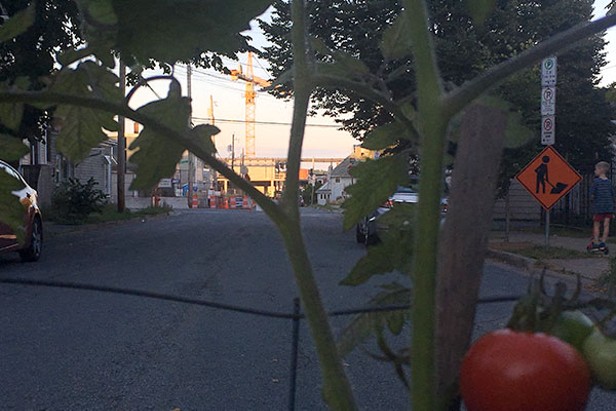 When Jennifer Beamer moved to Bilby Street in 2003 it didn’t really feel like a neighbourhood. “Frankly, it was a neighbourhood I could afford to buy a house in,” she says. But even in 2003, the short stretch of single-family homes was changing. Over the years the surrounding area has developed into the trendy north-end district it is today.

As it evolved, Beamer’s street became more of a community. She started getting to know her neighbours. Her kids played with theirs in the street. They walked to school together. The parents made BBQ chicken wings and vegan nacho dip for block parties in the summer. Last time, one of the neighbours brought an LCD projector and a sheet made into a screen so the kids could watch a movie outside.

Now, Beamer worries about the loss of that “neighbourhood-ness.”

Six multi-unit developments surrounding the close-knit community have been either proposed or are under construction. The buildings range from seven to 18 storeys and will bring about hundreds of new apartments, condos and parking spaces.

The neighbourhood is changing, whether those already living there like it or not.

Aside from the narrow roads and concerns around pedestrian-versus-car traffic, one of the biggest worries for Beamer and her neighbours is that the new buildings won’t add anything to the character of the family-centric neighbourhood.

The developments are mostly comprised of bachelor, one- or two-bedroom apartments, “which seem to focus on single professionals or young professional couples with maybe one child,” says Beamer. “But there are only so many of those people in Halifax, and there are lots of low-income families.”

Homeowners and tenants being priced out of their own community is nothing new in the north end, and Bilby Street appears to be next in line. The block is a hub of inner-city construction and development. A condo listings website run by Tradewinds Realty describes it as “HRM’s newest hot spot in real estate gentrification.”

Currently, HRM’s housing goals include working with developers, trying to steer them toward creating affordable housing while the city completes the final draft of its Centre Plan. The municipality can trade height allowances for “public benefit,” which can be anything from buried power lines to public art. The new Centre Plan, however, would require 75 of the “public benefit” developers receive from density bonusing to go directly to affordable housing.

Deputy mayor Waye Mason says HRM doesn’t have the power to make affordable housing demands of developers, but in an emailed statement he agrees there should be more affordable options in the urban core.

“We need affordable housing where people work. We don’t want the core of the city to be a wealthy enclave and all the service-sector workers having to travel in from an hour away,” he writes.

As it is now, the deputy mayor says when it comes to city planning, “Council just says, ‘Build residential here,’ and the developers consider what the market can support.” 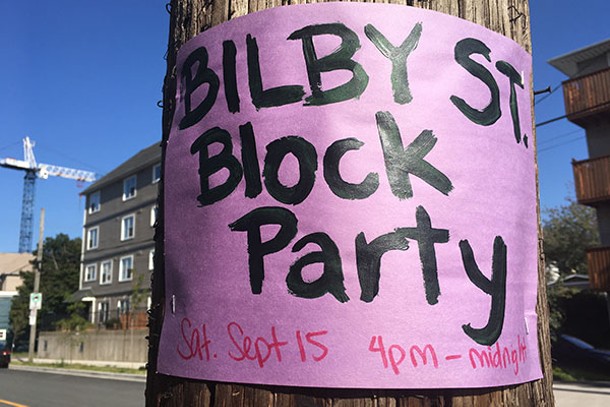 SANDRA C. HANNEBOHM
A poster for a recent block party on Bilby.

The lack of options can be particularly frustrating for residents.

Sakura Saunders has been living in a rented apartment with her family on Bilby Street for years the last year. An anarchist activist, she’s struggled to have her concerns heard by council and a planning department she says gives her the runaround.

She was told first that HRM can’t demand affordable housing from developers because the current Municipal Planning Strategy doesn’t allow it. But time and again she’s watched council amend the MPS to allow developers more height.

“You have the power to amend it, and in you amend it all the time,” she says, pointing to the special amendments council approved for the Willow Tree tower at Quinpool and Robie.

Saunders is now familiar with the bureaucratic shuffle that comes with anti-development activism. At first, she gathered signatures for a petition against the rash of condos in her neighbourhood. When that wasn’t enough, she held a block party to get many of the same people to sign again, this time focusing on one of the most recent proposals on the corner of Robie and Bilby.

Saunders says she supports high-density living but, “we shouldn’t be approving all these developments based on an old plan.”

Through the Housing and Homelessness Partnership, all three levels of government announced a goal of introducing 5,000 affordable housing units in Halifax by 2022, including 2,000 rental units.

The city’s five-year plan recognizes the regional centre as having “the greatest number and proportion of households facing affordability challenges,” but there are no targets for the urban core when it comes to affordable living. Those benchmarks are expected to come the long-awaited Centre Plan.

While she waits, and the buildings go up on Bilby, Saunders says she’ll continue to put pressure on to not let the city’s growth dismantle the lives of low-income residents.

“I’m an activist,” she says, “and there’s no way the municipality is going to meet their goal of affordable housing units if they don’t demand it.”