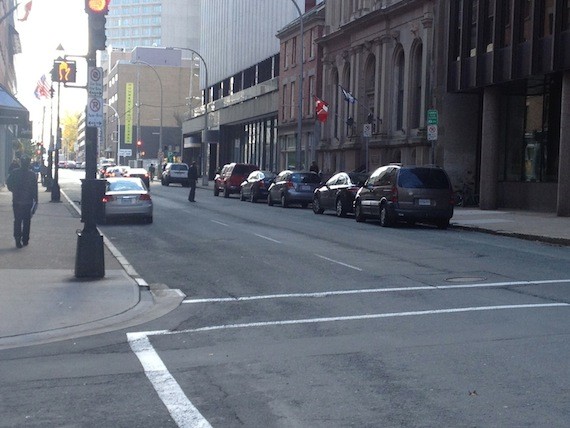 Bicyclists have a tight squeeze between parking on both sides of narrow Hollis Street.

Cyclists have snapped photos of licence plates and called 311 to report herds of vehicles parked illegally in the lane. Parked cars in bike lanes force cyclists to weave in and out of traffic instead of riding in a predictable way.

On October 23, a Metro Transit driver parked a bus in the lane, one cyclist posted on a local bike-enthusiast Facebook group. The following evening, parents parked in the lanes outside the Forum while waiting for their children. And on Oct. 27, cyclists reported “carmageddon” as vehicles filled the bike lane outside the Forum, rendering it useless.

“We may have to put up ‘no parking’ signs,” says councillor Waye Mason, who sits on the active transportation advisory committee. The standard diamond sign on the pavement in the bike lanes doesn’t indicate “no parking” to some drivers. That could mean HRM needs to launch an education campaign, which could be costly, he says.

Parking enforcement officers have handed out tickets to vehicles parked in the new lane, which was painted Oct. 15. Though initial signage was inconsistent, contractors added signs along the bike lane on Oct. 22 to make the parking prohibition comply with provincial standards.

The Motor Vehicle Act prohibits parking in bike lanes. A ticket for doing so starts at $25 and can increase to $57.96 if not paid within two months.

The city approved the Windsor Street lane in June after a push by the Halifax Cycling Coalition to create a north-south bike corridor on the peninsula. The Windsor Street lane still has a few minor glitches, say cyclists who have biked it. The lane stops abruptly northbound at Almon Street; the signage isn’t clear that a bike lane means no stopping; and one portion of the lane was repainted due to contractor error.

Blips in HRM’s learning curve and conflicts between cars and cyclists are bound to happen at this stage of the city’s bike lane implementation, says HCC co-chair Ben Wedge. Overall, he believes the trend toward a bike-friendly city is encouraging.

HRM is working on turning Vernon Street into a bikeway; the North End Business Association is surveying businesses about parking, which could influence a decision on an Agricola Street bike lane; and the city may finally be getting around to painting the Hollis Street bike lane.

Approved in 2010 as part of a three-step plan, the Hollis Street lane was scheduled for completion this past summer. “The Hollis Street bike lane is on hold for now,” says Dave McCusker, HRM’s manager of strategic transportation planning. “We’ll be building it in the spring,”

The bike lane could have been completed earlier if not for construction at Hollis and Duke streets, he says. “Fortunately, the bike plan is seven years old now, and the pieces are starting to fill in, and we’re getting continuous corridors now.”

The city intends to put up more signage along Windsor Street, McCusker says. Wedge says he is meeting with the city’s traffic team in early November to discuss how the city’s newest bike lane is progressing.