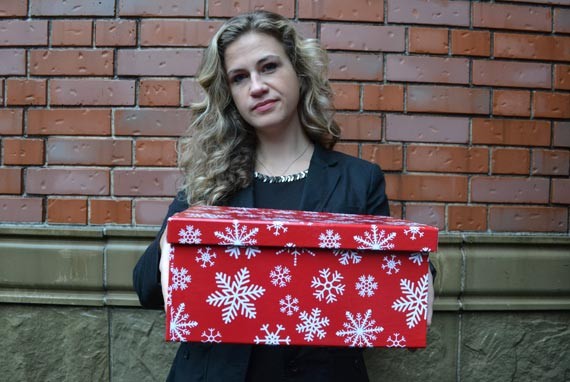 For Danica, childhood wasn’t a happy time—not even during the holidays.

“I had a mother that was very physical with me,” recalls Danica. “She would throw me down the stairs.”

For just over six months, Danica (not her real name) has been staying at The Marguerite Centre in Timberlea. The centre is a shelter for women in recovery from addictions and abuse.

Shortly after Danica’s arrival, she and the other women were each given a shoebox, each individually decorated and filled with small gifts.

“It was really overwhelming,” she says. “I knew whoever put this box together really thought about it.”

That was back in May.

The initiative responsible for the gifts, The Shoebox Project for Shelters, was founded in Toronto in 2011. The Halifax branch started up the following year.

Since then, they’ve handed out shoeboxes to women in shelters and outreach programs during special occasions, such as Mother’s Day and Christmas.

These days, the project is active in over 72 communities in Canada and the U.S.

“The goal really is just to show the women in need that someone in the community cares,” says Chisholm. “To give them a boost of confidence, make them feel special.”

The initiative means a lot to those who direct women’s programs, such as Miia Suokonautio of the Halifax YWCA.

“It sounds trite to say ‘every little bit helps,’ but the truth is, it is very much so,” says Suokonautio.

The shoeboxes they receive, she says, go to the YWCA’s Supportive Housing for Young Mothers.

“If you only have a few hundred dollars a month in discretionary money, tampons, toothbrushes, anything like that is seen as a luxury.”

Suokonautio hopes those who give to shelters around the holidays will consider doing so on an ongoing basis.

“We need people 12 months of the year,” says Suokonautio. “Don’t be afraid to use your shoebox or your holiday donation as a starting point of a larger conversation.”

After all, people will still be in shelters once 2016 rolls around, and probably for many years to come.

When asked if she expects to be still at the Marguerite Centre over Christmas, Danica had an unexpected response.

“I hope so,” she says. “I want to get through ’till the New Year, just to make sure, because relapse is so easy.”

Throughout her life, Danica was active through martial arts and volunteer work. But her past trauma eventually caught up with her, and she turned to alcohol to cope.

Then Danica’s father died, and things got worse.

“I realized one Christmas: I am alone,” she says. “It struck me and it really hit me hard.”

Danica lost her house, her car and nearly lost her life as a result of her drinking. It was a nurse who eventually convinced her to get serious help.

After coming to the centre, Danica began to face her issues head-on. Luckily, she has a home waiting for her. On the weekends, she is able to visit her husband and cats in their apartment. But not everyone can say the same.

According to the 2013 Report on Housing and Homelessness in HRM, 1,860 people stayed in homeless shelters in 2012. Halifax shelter beds were used a total of 66,154 times.

“No one should be living in a cardboard box,” says Danica.

Once Danica leaves the centre, she hopes to devote her time and energy to giving back to the community.

“Even a little gift is a big gift,” says Danica.