Cycling coalition using event to advocate for a network of protected bike lanes. 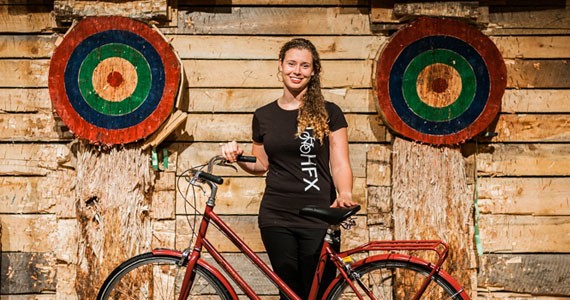 “What makes Halifax great is that it is relatively flat,” says Kelsey Lane, executive director of the Halifax Cycling Coalition. “Obviously, we have some hills, but it hasn’t been an obstacle in riding a bicycle.”

With new shops and cycling groups popping up in HRM, and council focusing on finally getting more bike lanes on the ground, Halifax is becoming a better place to ride a bicycle. In recognition of that growing culture and infrastructure, the Halifax Cycling Coalition has once again launched its annual Bicycle Awards.

“It’s more competitive this year because we are seeing more engagement,” says Lane. This year’s nominees include a record number of businesses and individuals competing for titles such as Best Halifax Cycling Event or Most Bicycle-Friendly Politician.

The HCC is also using the event to advocate for a connected network of protected bike lanes throughout HRM.

“Protected bicycle lanes are proven to be the number one way to encourage more people to ride a bicycle,” says Lane. “People will no longer be afraid of riding a bicycle on the road.”

Lane is optimistic that in the coming years a connected network of protected bicycle lanes will be implemented by HRM. Unlike previous Regional Councils, Lane says many of the new city councillors—such as Sam Austin and Shawn Cleary—are supportive of having a network.

“It is not just good enough to add some paint to a road when you are looking to build a cycling network, especially in the core areas of Halifax and Dartmouth, where you can do the most good,” says Sam Austin, the new councillor for Dartmouth Centre.

As a step towards a better cycling network, Austin says he’s been prioritizing and working with council and the public to devise a better off-ramp for the Macdonald Bridge bike lane once The Big Lift is complete.

“The data from planning has been clear, if you provide people with infrastructure, you get more cyclists,” says Austin. “It is just a matter of do we have the will and will we stick with it?”

Lane hopes that this year’s Bike Awards and those held in the future will be an incentive for community and political leaders to compete and get recognized for being bicycle-friendly.

“The new council and its support for protected bicycle lanes symbolizes a shift in the mentality around cycling,” she says.

Voting takes place online at cyclehalifax.ca/vote and closes on November 31. The winners will be announced on December 5 at Timber Lounge.