Betty Peterson is ahead by a century | City | Halifax, Nova Scotia | THE COAST

Betty Peterson is ahead by a century 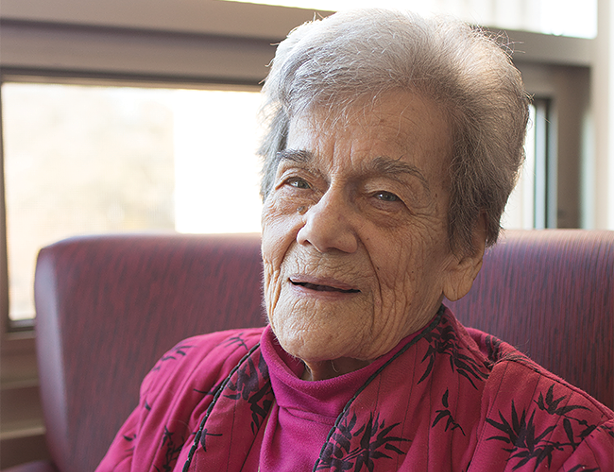 Peterson was born during the First World War. She grew to despise all wars, march for peace and advocate tirelessly for the underdog.

Born in Pennsylvania in 1917, Peterson and her late husband, Gunnar, were active for years in the Civil Rights movement and other progressive endeavours in Chicago, where they also demonstrated against the Vietnam War. Peterson, an avowed pacifist, and Gunnar were conscientious objectors during the Second World War. She once told a reporter there are no just wars—none—but she did have some sympathy for “freedom fighters” battling a ruthless despot.

She and her husband moved to this province decades ago. The couple had a summer place in Cape Breton prior to resettling in Nova Scotia. They’d become fed up with the way the American government was acting, the Watergate scandal and other U.S. shenanigans.

Gunnar, as the provincial co-ordinator of outdoor recreation, helped lay the groundwork for nature trails in Nova Scotia. He’s been praised posthumously by the legislature for his work in outdoor education. Betty relocated to Halifax from Cape Breton following Gunnar’s death in 1976.

A role model to a large number of women in Nova Scotia, Peterson is a Quaker who has steadfastly practiced what she’s preached. During her lifetime, she’s been a familiar sight at marches, sit-ins, anti-poverty protests, Indigenous rights activities and other events staged to shine a light on injustice. Those who know her are presented with a diminutive, straight-shooting woman who wears her heart on her sleeve.

Like her close friend and confidante, activist Muriel Duckworth, Peterson has always tried to make the world a better place during her long life. Housemates at one point, both were active in the Nova Scotia chapter of the Canadian Voice of Women for Peace.

“I have faith society must be improved, that we’re here to help each other,” Peterson said in an interview when she was 82 years old.
Some of Peterson’s help extended to causes fought in other regions of Canada, and a couple of her crusades were chronicled in national media reports. In 1988, she travelled to Little Buffalo, Alberta to support an Indigenous band’s land claim battle. Peterson also went to Labrador to take part in a First Nations rights protest with the Innu.

The protest in Alberta led to her arrest, with others, and temporary jailing. Back at home, she has demonstrated against the Halifax International Security Forum, an annual conference that this year runs November 17-19.

Fond of religiously documenting her long history of social activism, Peterson donated files of personal papers dating back to 1980 to the public archives.

“In Nova Scotia, Peterson continued her advocacy, (initiated in the U.S.), for the peace movement (especially with the Voice of Women) and also supported causes concerning the environment, feminism, education, nuclear disarmament and aboriginal rights,” reads the MemoryNS.ca website.

Promoting peace in a military town has been challenging for Peterson and her fellow activists. One group she joined in Halifax, to help push for justice and equality and to protest against war, was the funny-hatted Raging Grannies. She told a journalist when she was in her 80s that she worried the colourful band of greying protesters wouldn’t be taken seriously.

“We try to make our words really meaningful and biting,” Peterson said. “So you get up there and give people a poke in the ribs, a kick in the pants and get the message across.”

Her life, approaching the centennial of her birth, has been inspiring and not gone unrecognized. In 2000, Peterson was awarded an honorary doctorate from Mount Saint Vincent University for her advocacy work. Ten years later, at age 93, she received the 2010 Peace Medallion from the YMCA of Greater Halifax/Dartmouth.

In 2012, she got the Queen Elizabeth II Diamond Jubilee Medal for her decades of activism. In 2014, the Canadian Museum of Immigration at Pier 21 paid tribute to Peterson with a display containing a favourite, protest button-covered shirt she wore to various demonstrations. She said in an interview with The Coast that the first time she used the message-boosting garment was in 1982, at a massive peace march in New York City.

Although her commitment has never wavered and her spirit didn’t break, it bent a little when the rare discouragement arose due to a lack of progress in a pet cause.

“I’m the first to admit that you just want to crawl in a hole and cover it up after you,” Peterson acknowledged years ago. “But you cannot do that.”

In 2010, when in her early 90s, Peterson was asked to speak to protesters in Halifax on matters related to British colonialism, Edward Cornwallis and Indigenous rights. Standing in the rain, she urged everyone to sign a petition started by First Nations people and their supporters. Happy 100th birthday to a great campaigner.