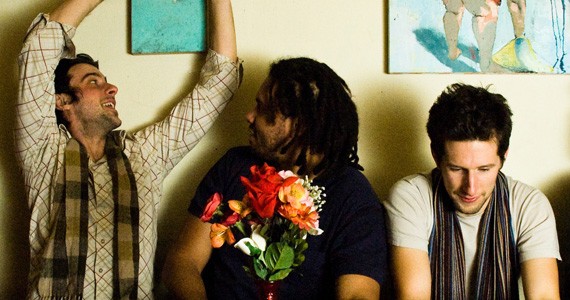 The Caravan are ruling the music video game lately, most recently with “What Up Steve,” a lyrical takedown of Harper against the backdrop of north end Halifax. Even earlier was “Words That Make You Feel Good,” a video that got immense traction on that tastemaker of tastemakers, Reddit. The making of “Words” is a story of ups and downs (and upvotes).

“We were really surprised to receive a MuchFACT grant our first time applying, especially since we aren’t a very established band,” says Mike Ritchie, guitarist. “After they saw the video, however, they told us that they weren’t going to air it.  So we were pretty disappointed about that---we just put it on YouTube. The director [Gesar Mukpo] had been promoting it a little and put it on Reddit without telling us. He had a catchy tag line: “liquor store clerk told me he was a rapper, so I made this video for him.” I guess people were expecting a really bad video, but were surprised that it was OK, so it took off and was voted on to the front page for a day. We got lots of love and great compliments and made a bunch of fans from all over the world.” As of printing, total views of “Words” hover around 175,000---this outpouring of internet love is the perfect response to rapper Kyle McKenna’s positive lyrics.

Although the views are steadily climbing, the attention is still a surprise to the band. “It’s funny, between this and ‘What Up Steve,’ we’ve had more press and attention in six months than in six years combined playing as a band,” says Ritchie. “We’ve been totally independent with no manager or booking agent or whatever, so it’s taken us a long time to get organized with stuff, but the next year will hopefully be a big one for us.”

With an album release at the Seahorse on the horizon (May 24 with Acres and Acres), it looks like he’s right.