Our resident expert in all things tasty celebrates her favourite flavours in town. 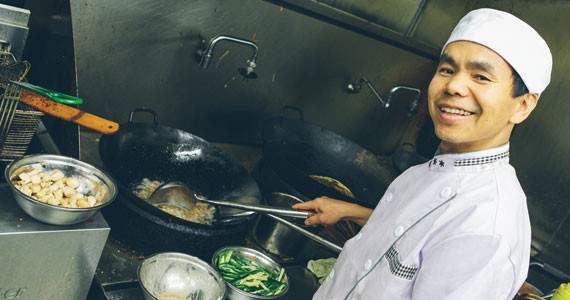 BEST SPICY
Chili Beef, Jincheng Chinese Cuisine
“Twice-cooked pork, chili chicken, chili beef and gonbao chicken.” Chef Daigen Zou rhymes off the most popular hot and spicy dishes on the Jincheng menu. The special chili sauce—a chef’s secret—is what he attributes to the flavourful secret of the chili beef’s success. A simple mix of thinly sliced beef and jalapeño peppers, you’d never suspect that it would be so irresistible. “Eating at Jincheng allows someone to try something new and explore a new area of taste buds they never have used before,” says Yaeko Kawabata. And explore they do: “Certain customers come so often it appears they may be addicted.”

BEST SWEET
Florentines, Scanway Catering
“Unni was once stopped at an event and told by a man that was attending the event: ‘These Florentines are better than sex,’” says Scanway Catering’s manager Angela Caldwell. “Blushing, she thanked the man for the compliment and has never forgot that moment.” That’s just one of the thousands of moments of pure bliss that someone has thanks to the handmade cookies that have been pouring out of Scanway for the past 28 years. Florentines have been on the menu since Scanway opened, and remain the most popular item at the bakery. They are, Caldwell says, “the perfect mix of chocolate, almond and sweetness that just makes you feel happy to bite into them.”

BEST SALTY
Jambon Pays, Ratinaud French Cuisine
“It’s full and earthy, salty, sweet, and buttery all at the same time,” says Ratinaud’s Tom Crilley of the shop’s Jambon Pays, the newly launched locally sourced and made prosciutto. “Seeing as cured meat is our speciality, Frédéric [Tandy] decided that prosciutto—or Jambon Pays in France—was something he wanted have available regularly at the store.” Last year, Tandy, Ratinaud’s owner, ordered full pigs’ legs from Oulton’s Farm. “This started the long process of prepping, curing and drying. Over the next 12 months he tended to their progress, paying attention to each stage. The work resulted in a cured meat unparalleled in flavour and quality.” There are only two legs a month available, and to put it simply, people went H.A.M. for this delicious ham and it sold out in days. Mark your calendars, start your engines, and get on your mark: June 1 is just around the corner.

BEST SOUR
Trinidad Sour, Untitled Eats (Jeffrey Van Horne)
Forget the sweets—it’s the sours that Jeffrey Van Horne and Jenner Cormier are pouring at Untitled Eats and Noble that make the two bars worth going back to time and time again. “Sours are all about that silky-smooth texture that comes from the egg white,” says Van Horne, your pick for Best Bartender. “The creamy texture from the egg white softens the bite of the acid in the fresh citrus. Sours that use bitter components give the cocktail a dry tannic finish this make you want to have another sip and is great before or after a meal.” The Trinidad Sour, sometimes found on Van Horne’s Untitled Eats menu, is an exceptional drink: it uses a full ounce of Angostura bitters. “It balances the extremely bitter cinnamon, clove and allspice flavour with a sweet almond syrup—orgeat,” says Van Horne. “One sip of this sour and the flavours dance in your mouth hitting sweet sour and bitter spots on your tongue.”

25 all right: a round-up of dishes you have to eat right now

Ratinaud gets an upgrade