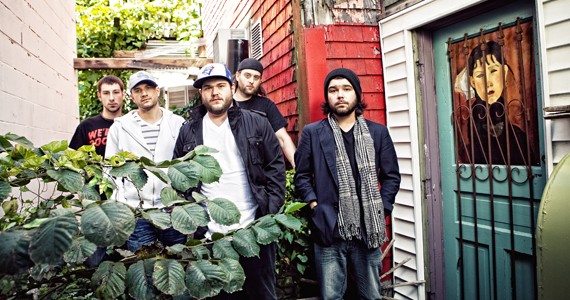 
Rain Over St. Ambrose is worried about the weather. Curt Le Blanc (guitar) is checking the road conditions on our notoriously fickle east coast before he---along with brother Cory (guitar/vocals), Marc Durkee (bass/vocals), Luke Amirault (drums) and Matt Amirault (keys/vocals)---heads out on a Maritime tour, hitting Charlottetown, Fredericton and Saint John. They have a lot of driving hours coming up, and Le Blanc doesn’t plan on wasting time playing punchbuggy. The group is preparing for a September album release, following up its EP, *Overton Window* (released in November in time for a Nova Scotia Music Week showcase in the band’s hometown of Yarmouth). The new, yet-to-be-named album needs a bit of group brainstorming before the group records it during its trip to the ECMAs, which will be easy to do during the 50-plus hours they’ll rack up driving around the Maritimes and to Ontario for their first Toronto show---showcasing at CMW. It’s been an eventful year for the group, and Curt believes winning DevCom---a development competition for new and up-coming bands in Halifax---and a recording session at Codapop, along with the support of Rain Over’s label Acadian Embassy, has made the difference. “That’s the number one thing right there, just Trevor Murphy and Josh [Pothier],” he says. “They really help us out a lot.”

The Yarmouth rock band has gained a steady following in Halifax that Curt partly attributes to displaced Yarmouthians supporting homegrown talent. But Rain Over St. Ambrose’s classic blend of indie, pop and rock keep the fan base growing. But their personal tastes couldn’t be more disparate, says Curt, listing The Constantines, Wooden Sky, Men at Work, Sepultura as a typical mix. “I think every member of the band listens to something different, we have a lot of metalheads in our band. If you looked at the CDs we play in the car on the way to show you’d never guess that we’d play the set we play.” Whatever their methods, it seems to be working. Check them out on April 7, at 1313 Hollis, at an Acadian Embassy showcase featuring Quiet Parade and Kuato.