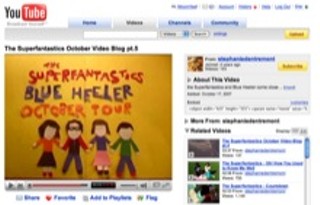 Last year’s Best New Artists, The Superfantastics, didn’t rest on their laurels or let all the praise go to their cute noggins. They released their debut EP, Pop-Up Book, played North by Northeast, Sappyfest and toured with Julie Doiron and Dick Morello (now known as Calm Down it’s Monday). Both Stephanie d’Entremont and Matt MacDonald name that tour as a 2007 highlight, especially Doiron’s pre-show calisthenics. MacDonald says, “I think we weirded out bar patrons from London to Oshawa with our post-sound-check-pre-rock-show lunges and jumping jacks.” When the pop-duo aren’t working out, merch craftster and “video nerd” d’Entremont takes her camera everywhere, like into The Constantines’ recording session, where she filmed them eating doughnuts. “I think I make people uncomfortable sometimes,” d’Entremont says. “I just roll on conversations. Some people just freeze or walk away, but I feel naked without it. It only made sense to make some music videos for my own band and when we went on the road it seems natural to film everything. Luckily people seem to dig it. It is nice to see that it’s not only my dad who watches the video blogs.” Mike Holmes, who directed the animated video for “Tonight, Tonite,” used about 26 familiar characters and about 200 drawings. “We shot for three days in two different kitchens,” he says. “There was some trial and error at the beginning---I kind of wish we could have reshot the first day after learning so much by the third. Stop-motion is a patience-testing process: We shot in my friend Ian’s kitchen for the prom scene and him and Matt Charlton were drinking all day and playing basketball outside and watching the Aqua Teen movie and I felt like the kid who had to practice his violin. But I’m totally proud of it and can’t wait to work on another.”