Choosing from the pile of films that didn’t get a local cinema release, our professional voyeurs log a year of DVD love with their 2011 picks. 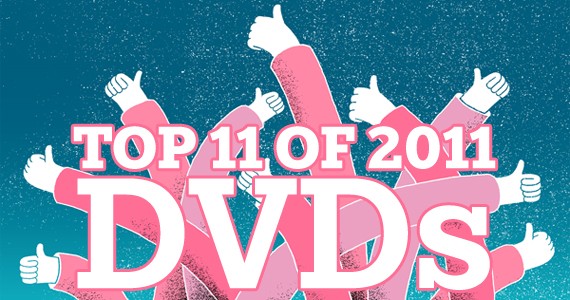 Bobby Fischer Against the World (Mongrel)

Once upon a time, chess champions were famous. This doc follows the chaotic life of the biggest ever, and how pressure to compete drove him off the rails.

Bruce Springsteen, The Promise: The Making of Darkness on the Edge of Town (Sony Music)

In A Better World (Mongrel)

Star rock documentarian (in print and film) Crowe revisits his buddies in PJ, charting their two-decade arc from the Seattle grunge scene to becoming one of the world's biggest cult bands.

A heartwarming Quebec comedy about a shaggy 40-something who discovers he's fathered hundreds of kids thanks to the regular sperm bank deposits he made in his 20s. See it now before Hollywood remakes it in English.

Around a Small Mountain (Cinema Guild)

New York Times street-style photographer is a captivating character: accepting no pay for his work snapping stills of Manhattan's chic and elite, living minimally and alone---not even the documentary can solve this puzzle.

You don't have to see part one, Mesrine: Killer Instinct, to get hooked on this gripping and gruesome second instalment chronicling French gangster Jacques Mesrine's (Vincent Cassel) post-jail criminal life and demise.

The Round Up (eOne)

This documentary starring Joyce McKinney examines her very public private life after she "kidnapped" the Mormon missionary with whom she was smitten. It's hard to tell fact from fiction as McKinney appears increasingly deluded.

Navigating the line between Shakespearean dialogue and contemporary touches, including the gender switch of Prospero to Prospera (Helen Mirren), this adaptation is entertaining---comedic talent includes Russell Brand---and enticing.

Brit powerhouses Steve Coogan and Rob Brydon venture across England on a food-critiquing road trip for Coogan's work. Their meals develop a pattern of one-upmanship with their celebrity impersonations while ruthlessly mocking the other.

Everything Must Go (Maple)

Will Ferrell straps on his serious face and succeeds as an alcoholic left jobless, wifeless and alone on his lawn with his furniture and his demons. Ferrell underplays deftly and Rush resists corny redemption cliches.

An incomplete entry in the Third Reich's film library is dissected in this documentary about the illusions and lies behind Hitler's motion-picture propaganda. Hersonski shines a light on the sinister side of film's seductive power.

Jay Baruchel, Scott Speedman and Emily Hampshire circle awkwardly around each other while a serial killer prowls outside their apartment building. Montreal in winter is an appropriately icy setting for this chilling black comedy.

This mournful, beautifully photographed meditation on jealousy and infidelity examines a strained marriage between Keira Knightley and Sam Worthington. Both face temptation, and there's delicious tension in waiting to see who gives in.

Agree or disagree with its conclusions, this investigation of an American education system that strands kids based on race, money and geography is a gripping, infuriating piece of intelligent provocation.

Speaking of Critics' Picks Of The Year

Ben Caplan, performer of the year