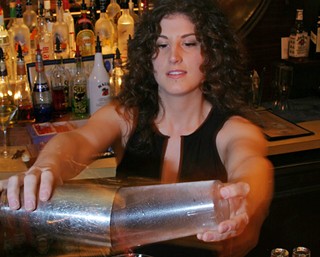 It takes a sterner constitution than ours to look at the list of cocktails and martinis at Bitter End and not salivate at the prospect of their delicious combinations of fruit flavours and exotic liquers. How about the lychee martini with vodka, lychee liquer and cran? Or the Crystal Slipper, which contains gin, Blue Curacao and bitters? Or what if you want something a little off the wall, like a Red Raider; Jack Daniels, triple sec, grenadine and lemon juice? And the creativity and precision with the cocktails and martinis clearly extends to that most Canadian of mixed drinks, the Caesar.