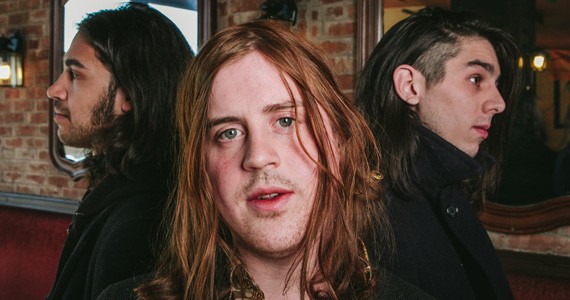 The Scoop Outs are clustered around a table in a north end bar, pooling their loonies to get another round of drinks. Bassist Ben Manuel, drummer Ed Caswell and guitarist/singer Jesse Webber joke, bicker, talk over each other, finish each other's sentences and generally give off a very strong vibe of lifelong friends.

Caswell and Webber met while attending Dartmouth High in 2006, bonding over a shared love of---what else?---punk music. "I dropped out of grade 12, then I went back," says Caswell. "I was a year behind and in a film class with Jesse and there was an exercise where we had to name our favourite bands. I was trying to get a laugh and I said *NSYNC and Britney Spears, then Jesse said Black Flag, The Dead Milkmen, Minutemen, Meat Puppets and I was like, 'Holy fuck, this guy likes some cool music.'"

The rest was history. "He came over to my house and taught me how to smoke cigarettes," says Webber. "It was totally typical, two outsider, sarcastic, jerkoff, fuck-ups started hanging out and practicing," says Caswell.

They played for a while as a two-piece, then Ben Manuel came to a gig.

"He had a shaved head and ripped jeans and these big combat boots and he was freaking everyone out because kept stomping along to the songs with these big boots," says Webber. "He was like, 'Do you want me to jam with you?'"

"I didn't know who you guys were or what kind of music it was but I know I liked it," says Manuel.

"We all love punk rock," says Caswell. "We're not that punk but you can tell we listen to punk."

"I always say we play rock and roll and try to explain it later," says Manuel.

The Scoop Outs are a hard-working bunch ---for two years the band played a weekly gig at Jacob's in Dartmouth, hosting a rotating cast of characters including out of towners, and fostering the new Dartmouth scene. But the perceived divide of the harbour is something Caswell believes does more to harm than help.

"I'm sick of this Dartmouth shit," says Caswell. "We're still part of the HRM, it's all the same."

"Well, there is a Dartmouth thing going," counters Webber. "Like you have the Odd Socks and the Elk Lodge---"

"There are a lot of Dartmouth bands and we're very close but it's all the same," says Caswell. "I'm getting a little irked by the 'Dartmouth' bands and 'Halifax' bands---it's the same thing. But I will say this, there is a Dartmouth sound, if you listen to an Odd Socks record, a Cannisters record or a Scoop Outs record you'll hear it."

The Scoop Outs' record was made in Dartmouth, at OmniArt Studio with Fred Lee, who became a friend after the band moved into a warehouse across from the studio. It took a long time, but it was worth it. "I was uncomfortable enough at how good it sounded at the end," says Webber.

"I wanted to start with something that was a highly produced album right off the bat and get people's attention," says Caswell.

The new album is set to be recorded next month at Echo Chamber. The band packed Jacob's at its album release and has fans in Joel Plaskett and Dave Marsh, but it's clear they haven't let anything go to their heads.

"All my songs are about being ordinary," says Webber. "The subtle curse of ordinariness," says Caswell. "It's not even that hard or heartbreaking."

"But playing rock and roll is kind of the only thing you can do if you're an ordinary person, like if you're not an athlete or something," says Manuel. "Being in a band is something anyone can do."