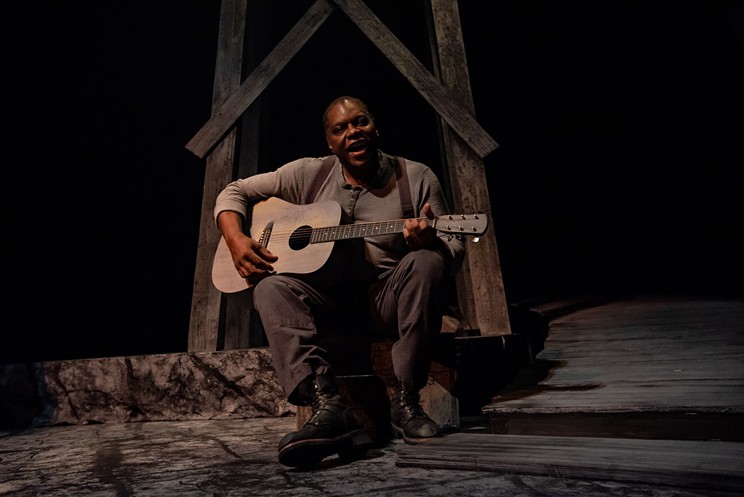 When Jeremiah Sparks answers The Coast’s phone call one morning this week, his “hello” is a gravelly rubble. He doesn’t mention it, possibly because it’s the sort of wear his usual baritone has gotten used to while starring in Neptune Theatre’s latest play, the one-person musical about a man trapped underground for nine days: Beneath Springhill: The Maurice Ruddick Story.

“As the play goes on, you'll find my voice changes, and it gets drier. I’m always reaching for air; I’m always trying to take a sip; I’m trying to find water. All those things are in me, and as we get closer and closer and farther and farther, as days go by, I try to portray that,” Sparks comments later, when asked how he embodies the based-on-real-life role of Maurice Ruddick. It feels like listening to the actor and the role fuse as Sparks’ voice continues to crack.

Stoo Metz
Sparks portrays a host of characters in telling the story of how Ruddick survived his time underground.

The tale Sparks weaves from historical fact and guitar-backed song is one from local lore, so well-known to a Nova Scotians of a certain age that, when Sparks told his mother about the play “she said ‘Oh, the singing miner?’ And I said ‘You know about this guy?’ and she said ‘yeah, yeah.’”

Neptune Theatre’s return to normal programming after the fits and starts that the pandemic created, Beneath Springhill follows Ruddick’s remarkable survival story. It’s also the show’s Atlantic Canadian debut, after a run at Vancouver’s Granville Island stage last summer, which also starred Sparks. “I’m so glad we did it before, because bringing it home to my people, my Nova Scotians, I want it to be right. Because I feel a lot of love here,” the actor—whose mile-long musical theatre resume boasts credits like a Toronto production of The Lion King—says. “It’s a Scotian story and I’m Scotian.”

Stoo Metz
Sparks says bringing this Nova Scotian story home has been a landmark of his career.

“Besides the fact that I learned about this history, I’ve learned about myself,” Sparks says, clearly still embodying Ruddick’s spirit in a set-jaw resolve mixed with a smile. “I’ve learned that when I put my mind to something, when you put your mind to something, you can do anything. Your mind has the ability to work it out. It will always work it out. I’ve always found that out in everything I’ve taken on, but this was one of the bigger things I’ve taken on…. I had doubts. And I always have doubts. And we always have doubts. And that’s okay, as long as you push through them.”