The World Portable Gallery Convention runs for the month of September through the Eyelevel Gallery, bringing international art directly to you, in some of the most unique methods imaginable. 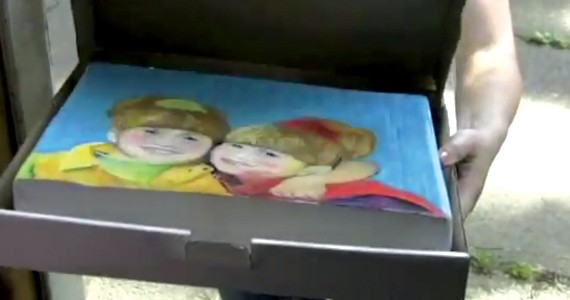 Art will be available in all travelling forms, including coming to your door pizza-style beginning September 1.

Imagine an art exhibit moving through traffic lanes and streetscapes, on beards and on jackets, in attics or pockets. Would it change the way you view it? How much does art rely on its context? In a series of manifestos in the 1960s, German-born Gustav Metzger used his theory of Auto-Destructive Art as an emblem of modernity and dissolution of standard practice. Metzger wanted "art of change, movement, growth. The most vital movement now." Entrenched in a post-war distrust of institution much more severe in his time than ours, Metzger's concept of art outside the box---in the streets in fact---is one of many themes of Eyelevel Gallery's provocative and dynamic World Portable Gallery Convention.

From September 1 to 29, the not-for-profit artist-run centre hosts over a dozen artists and artworks from Canada, the US and all over the world with exhibits at your fingertips. All month, anybody and everybody are welcome to call Eyelevel's hotline (425-6412), like a taxi stand, to have art delivered right to you. Operators will also arrange visits to off-site exhibits and galleries.

The Convention kicks off with an opening on September 5 at Eyelevel, followed by a week of artist talks, interactive street performances, panels and a gallery softball game on September 8. Conceived and created by Eyelevel's director Michael McCormack and global artist Michael Eddy, with the help of Elizabeth Johnson, the WPG Convention is a dialogue about the nature of galleries, public art, viewing experiences and the importance of networks, conveniently in the shadow of Nova Centre, the 18-storey hotel-convention centre. The $160-plus-million solution to downtown downturn has been a development process full of conflict. Eyelevel's WPG Convention explores and exposes the limits of such institutions, as well as imposed boundaries on art.

"It's not necessarily the content of the works, but the presentation and delivery," says Johnson. "Because they're portable and mobile, we're trying to move outside of conventional standards of how art is being viewed by pulling away from certain institutions. There's such a power within that."

Mobile galleries have been around Halifax for awhile, Johnson says, often popping up in response to the politics or processes of public and private systems. As a NSCAD grad, and especially amid Nova Centre's permanence, Johnson has seen the difficulties that arise from depending on institutions.

"I really look up to the artists in the Convention who aren't relying on a gallery but are just opening one in their house or on their beard," she says. "Or transforming and adapting what already exists."

With McCormack, Johnson will be running the P.R. Rankin Gallery at Eyelevel. "It's an answering machine gallery," she says. "If you call for delivery but no one is here, leave a message; you'll still be involved in an art piece. The messages will then be on display so people can listen to them."

Outside the Gallery, the deliverable art ranges from the curio to the pamphlet, the button to the video poem. Late at night on September 7, Moncton-based artists Valerie LeBlanc and Daniel Dugas take their MediaPackBoard to Argyle Street. In front of the future convention centre site, they will interact with the public using live-feed media, involving new audiences in the visual arts. The Velcro Gallery, another walking exhibit, was founded in 2010 by artist and NSCAD assistant professor Craig Leonard.

"Mainly, the idea arose as a roaming gallery in the form of a jacket with a circular Velcro patch on the front" he says. "Small works would be affixed to the patch and I would wear the 'gallery' around town. The motto is, 'Always Open When On.'"

Projects like MediaPackBoard and The Velcro Gallery, along with Kate Rich's Feral Trade Cafe (a global import-export service that functions through social media and human connection), challenges notions of "gallery" while redefining it through experimentation and relocation. For example, since 2008, 161 Gallon Gallery has been hosting art shows in a cubbyhole on Cunard Street.

Started by Dan Joyce, Miriam Moren and Ryan Park, the intimate 35x37x34-inch space will showcase the work of Lukas Pearse, available to view through the Eyelevel hotline. 161 Gallon redefines the typical "white box" of art presentation. Along the same lines, the resurrected Gallery Deluxe Gallery adds further layers of irony, mimicry and mobility to the discussion.

From 2005 to 2007, Coast contributor Paul Hammond and Francesca Tallone lived on Willow Street in an infamous house of art, music and weird projects. "During that time," says Hammond, "Francesca and I renovated our tiny crawl-space attic into a fully functional art gallery. It was modeled after standard white box galleries with the exception that it was only three feet high and at the top of a ladder."

After showing over 30 exhibitions, including international artists, Hammond and Tallone moved on and closed Gallery Deluxe Gallery. But in the spirit of portability for the Convention, they decided to build a life-sized replica of Deluxe inside of Eyelevel, "so that visitors could experience something as close to the original as possible," Hammond says. "But in a completely different context."

Featured within it is the work of Chris Foster. "The themes of his work---architecture, portability, alternative spaces, adaptation---fit so well with our idea of moving the gallery," says Hammond. Foster will show a postcard series of redesigned vehicles, which can be coloured in and taken home by the viewer. He is also sculpting a custom Winnebago.

"It's interesting what happens when you shift the context of art," Foster says. "An important thing about art is audience. We live in a time when people seem to have less interest in traditional gallery experiences, so in that light these alternative galleries are good opportunities for new engagements."

"What's appealing about playing with expectations of art presentation is that it's based on the same exciting model as art itself, which is that there is no true model," Hammond says. "Art happens."

Beside Gallery Deluxe Gallery, Eyelevel will house the Members' Gallery and the dispatch of for-hire bicycle courier service, Fixed Cog Hero Deliveries, pedaled by Mathieu Arsenault. "Bicycle messengers use the roads in very subversive ways," Arsenault says, excited to transport art and goods as performance. "Messengers live within the structures of a road system but make it so they are not controlled by it. This is what the World Portable Gallery is all about."

In September, the most vital movements take their forms in so many unique and captivating shapes, including Metzger's Reduce Art Flights campaign and The Nanomuseum by artist and scholar Hans Ulrich Obrist. The works have thematic and ideological consistencies but are still so diverse.

With Nova Centre in the background, Eyelevel Gallery hopes the WPG Convention will inspire talk about confining standards in art and social practice, and the importance of alternative networks. "It's OK if it's controversial to some people," says Johnson, "We want to bring dialogue to these activities and ideas, and this can be done through art."