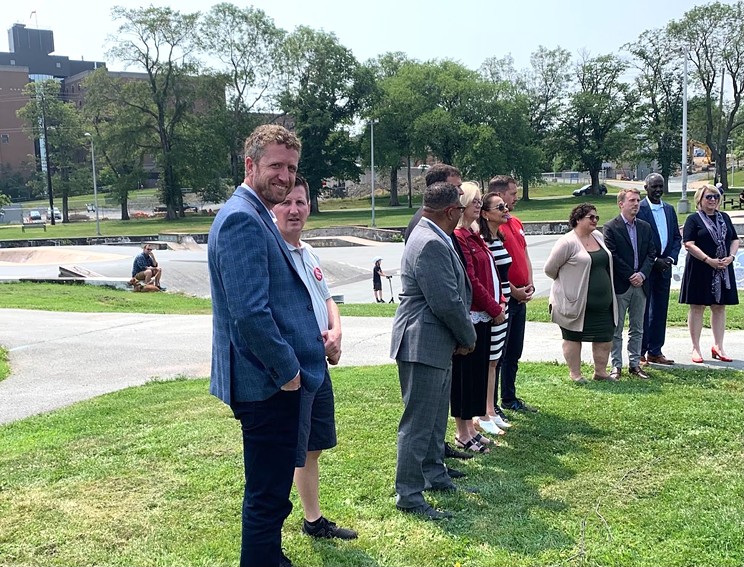 Nova Scotia’s major parties are all focused on health care this election, but their plans differ.

The Liberal leader and candidate for Timberlea-Prospect said the party’s plan is “realistic, smart and makes sense for this province,” during a campaign event Tuesday at the Halifax Common.“It’s fiscally responsible, it’s forward-looking and it builds on what’s already underway in Nova Scotia,” Rankin said.

Rankin’s plan would add $131 million to 2021-22 spending, compared to $430 million more in spending that Houston's PCs promised over the same period of time. The NDP has not attached dollar amounts to its health care platform.

At more than $5 billion, health care is the largest single line item, by far, on Nova Scotia's overall budget of nearly $12.5 billion in spending. Education and early childhood development, costing nearly $1.6 billion, is the second-largest expense.

Rankin said his party’s pledged new spending, which is less than half of what the PCs have promised, is “targeted and effective.”

“Keep in mind the budget for health increased by over $400 million. So he’s proposing nearly a billion-dollar increase,” Rankin said of Houston’s health care platform.

The Liberals have previously announced hospital upgrade projects and ongoing work to add 500 long-term care beds between 2025-2027, a pledge Rankin made before he dropped the writ. His government’s spring budget increased the health department’s spending by $510 million.

“I’ll let the voters decide if they want to spend over a billion dollars extra,” Rankin said.

Without a past budget to refer to, both the NDP and PCs say they would add more long-term care beds if elected. Houston has pledged to add 2,500 beds over three years, which he expects would cost $411.7 million.

Burrill’s platform promises single long-term care rooms for all who need them by 2030, without an attached dollar value. While campaigning in Sydney, he said that 400 beds will be added to Cape Breton if the NDP is elected to form the government.

Both the NDP and PCs say they would increase the care hours in nursing homes to the recommended 4.1 hours of care per resident per day. The NDP intends to increase the wages of continuing care assistants and would add a dedicated seniors' advocate office to oversee continuing care.

What happened at Northwood?: How Nova Scotia failed its most vulnerable.
an exclusive coast investigation

The three major parties have each made promises to improve access to mental health care, but at very different price points.

This spring, the Liberal budget put $336.5 million towards mental health spending, which works out to 6.3 percent of the province’s estimated $5.3 billion health budget.

Both the PCs and Liberals have plans to create an office of mental health within the health department.

The Liberals say if they’re re-elected, $4 million will be added to the existing mental health budget to launch eight walk-in clinics and add mobile-outreach nurses to Nova Scotia streets.

Both the PCs and Liberals have plans to create an office of mental health within the health department.

All three parties laid out plans for improving access to primary care while nearly 70,000 Nova Scotians are waiting for a family doctor. The Liberals intend to create a primary care council to work on improving doctor recruitment and spend $1 million annually on a new community-based doctor integration program.

The NDP says it would improve doctor recruitment by better using complementary health professionals, like physicians assistants, which are not currently licensed in Nova Scotia. The PCs say they would create a pension program for doctors and improve their pay.