Batter up for Acadian Fish & Chips 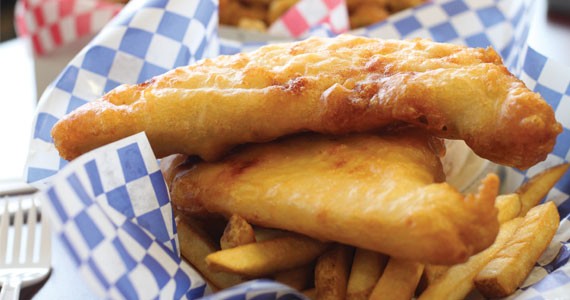 Acadian Fish & Chips’ specialty is, you guessed it, fish and chips.

The first thing we spot at Acadian Fish & Chips, after the Acadian flag, of course, is a string of lobster traps that shore up the border of the parking lot. They lead to a lighthouse beside the restaurant that stands ready, one would guess in this landlocked space, to alert cars of any puddles they may unexpectedly crash into.

The Maritime kitsch of Acadian Fish & Chips makes it look like tourist fodder. But a tourist trap makes as much sense on Hammonds Plains Road as a tiger trap would make on Spring Garden Road. This is just your average family restaurant, in this case with counter service and food served in takeout boxes with plastic cutlery.

The restaurant is big, with half of the room taken up with tables, and the other half wide open with the cash counter and a fountain pop counter with a phalanx of vinegar bottles on it.

We wander to the cash counter, and order a two-piece fish and chips ($9.99), clams and chips ($11.99), a side of gravy ($1) and a couple of fountain pops ($2.25). We sit and wait for our number to be called, sipping our sodas as Larry the Cable Guy blares from a television that looks down over the seating area.

Our tray is a pretty picture: blue gingham paper wraps up around two big, golden filets of fish on a pile of French fries, while red gingham paper peeks out of the corners of a box topped with curly fried clams. Tubs of tartar sauce and coleslaw finish up the packages.

As cute as it is, it feels wasteful since we're eating in, and it would be nice to use real utensils. Nevertheless, we dig it with our plastic forks.

The fried clams are great. They are plump, full clams, lightly fried so they are still tender and springy, replete with the deliciously buttery, briny earthiness that you can only find in fresh shellfish.

The fish itself is nice and tender, if under-seasoned. And while the batter has, for the most part, a nice colour, there are parts where the gold peters out to wan beige. As expected, as soon as I cut into one of those areas I hit the mealy goop of undercooked batter.

Our server is gracious and offers to replace the piece. She swings by and collects the tray where I've piled the pieces. I eat the chips while I wait. They are terrible: frozen fries instead of hand-cut are always a disappointment since it's literally half of a concept executed in what is essentially an icy shrug.

The coleslaw is a fine foil to the greasy meals, though I prefer a more acidic slaw that really cuts through a plate of fried food. The tartar sauce depends a little too heavily on mayonnaise, ending up a little dull. The sage-heavy gravy tastes like a cup of Thanksgiving.

When she drops by the new fish, our server says that she prefers the fish well- done and that if I return I should order it that way. She also tells us that the fish is brought in fresh daily, and that the oil is changed each morning. She's earnest and pleasant, and it's clear that she wants her customers to be satisfied.

The new piece is actually on the overcooked side, but it's definitely better. I eat the middle and avoid the hardened ends.

At times I'm convinced that great fish and chips is at worst a myth---something only truly great in theory---and at best a brass ring that we all grasp once or twice, spending the rest of our diner days trying to recapture the experience. Acadian Fish & Chips is fine, but it certainly hasn't convinced me otherwise.

Write your own review for Acadian Fish & Chips here