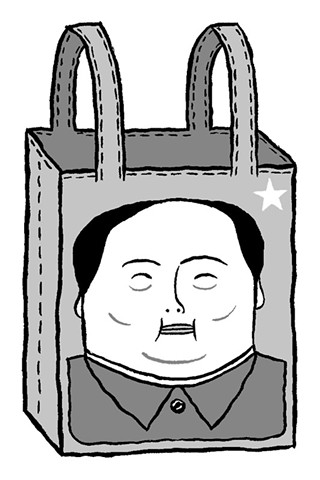 This just in from the what-the-fuck? files: China is banning plastic shopping bags.The country’s State Council struck up the new legislation last week prohibiting the manufacture, use or sale of flimsy bags (with a thickness less than 0.025 millimetres, if that means anything to you). Thicker plastic sacks are still kosher, but they must be bought by consumers.Honestly, why bother?Reality---not cynicism---is behind that question. I mean, consider this single paragraph from a Joseph Kahn and Jim Yardley New York Times story last August about Chinese pollution:“Environmental woes that might be considered catastrophic in some countries can seem commonplace in China: industrial cities where people rarely see the sun; children killed or sickened by lead poisoning or other types of local pollution; a coastline so swamped by algal red tides that large sections of the ocean no longer sustain marine life.”So Chairman Mao’s brain trust has banned plastic bags.Great.Underwhelming solutions to calamitous environmental problems are by no means the sovereign territory of earth’s most populous nation. Nova Scotia, for its part, just banned smoking in cars carrying children under the age of 19.Look, I don’t like smoking. I detest it. I grew up in a family of smokers---car-with-the-windows-up smokers, dinner-table smokers, smoke-at-the-counter-while-mixing-up-the-Swedish meatballs smokers---but I question the value of this Canadian Cancer Society-lauded bill.You can still pick up your kids at school in your monster truck, drive them to the fast-food strip and idle for 15 minutes at the mcburger drive-thru before you stuff them full of crap. Now, you just can’t light up at the same time.One less cigarette’s-worth of chemicals drawn into your child’s lungs is nice, yeah. But it’s a drop in the pond.Ditto shopping bags.I tried to figure out how many plastic bags China actually uses. Maybe it’s about four billion a week. That’s according to Melbourne, Australia’s Herald Sun. Maybe it’s about three billion a day. That’s the word from the government-funded Voice of America news service. A Chinese government statement announcing the ban pegged it at “huge amounts.”Those billion, trillion, mega-fuzza-wazillion bags take 1,000 years to dissolve and according to environmental non-profit group Clean Up Australia, the amount of oil products in a single bag would power a car engine for 11 miles.But are plastic bags China’s biggest problem, or just easier to fix by decree?Back to Kahn and Yardley in the New York Times:“Pollution has made cancer China’s leading cause of death, the Ministry of Health says. Ambient air pollution alone is blamed for hundreds of thousands of deaths each year. Almost 500 million people lack access to safe drinking water...only one percent of the country’s 560 million city dwellers breathe air considered safe by the European Union.”China’s CO2 emissions, according to the Netherlands Environmental Assessment Agency, topped America’s in 2006, making it the worst overall global greenhouse gas polluter.So naturally, they’re banning bags.Me? I’m back on plastic shopping sacks.I’m a cloth-bag-user from way back: at the grocery store, the drug store. There was a time---many times, in fact---when I fought to bring my own bags to the mall while shopping with my grandmother. She would nearly keel over from the shame, employing her best stage whisper at the GAP checkout: “But people will think you’re shoplifting!”Yet, despite my anti-plastic bag crusade, there were always, somehow, plastic bags kicking around. People would bring them into the house with god-knows-what inside and then, I don’t know...they mated and reproduced in their little under-sink bag holder.These days, the lowly plastic bag has become so vilified, so universally derided as a symbol of our environmental ho-humism (and, perhaps more powerfully, cloth bags---from those gaudy green Pete’s Frootique ones to the uppity “I’m not a plastic bag” bags---have become so fashionable) that I can’t find a plastic bag anywhere.When I need a bag---clean(ish), hole-free and not so skinny that I can’t fit a loaf of homemade bread into it (those pink bags my papers arrive in each morning are useless)---there are none to be had. I have honestly thought some days of ringing at the neighbour’s door. Excuse me. May I borrow a plastic bag? It’s absurd.So now, at the grocery store, I’m actually partaking in the free bags. It’s only a couple a week. No big deal, right? Just a drop in the pond.

Early risers jump the gun at the Farmers' Market