A beginners guide to biking to the beach in Halifax | City | Halifax, Nova Scotia | THE COAST

How to get from downtown Halifax to Rainbow Haven with just two wheels and two feet. 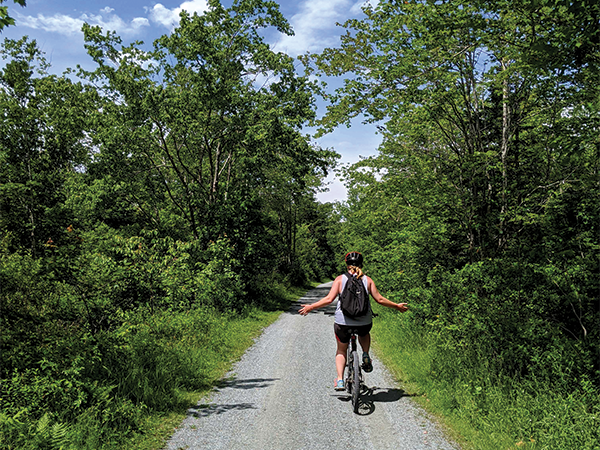 Caora McKenna
It’s smooth sailing while you ride along the Shearwater Flyer Trail.

What if we told you that you can bike from downtown Halifax to the beach? Really. Even if you haven't biked in years and don't remember the hand signals. It'll be a bit sweaty and a bit stressful and you'll curse at the lack of signage but you can do it—and it'll be worth it.

Haul your bike out of the garage, pump up the tires, grab a helmet (did you know once a helmet smacks the ground you're supposed to replace it?) pack your water and snacks and don't forget your swim trunks—or your over-zealous enthusiasm.

The good news is the worst part is the first part. Bikers definitely weren't top of mind when the Macdonald bridge was put together—and riding down North Street with the bridge in your sights is a letdown. Cyclists are forced to loop down and around the bridge to get on the bike lane.

Once over the water (at least there are nice views to distract you from your panting), you'll come out facing Windmill Road—with zero bike-friendly indication of where to go. Fret not! Get off your bike and cross the lanes of cars to get back on your bike on Windmill Road going south. Once you make it around Alderney Drive to the intersection at Kings Wharf Place, the Trans-Canada Trail awaits. It'll be just you and one of the best views of the Halifax Harbour you've ever seen.

That trail will spit you out at the Woodside Ferry terminal parking lot—a good place to drink some cool water and pump yourself up for the next leg. (You've got this: The beach awaits, remember?)

The 3.8km ride down Pleasant Street to Shearwater is flanked by lupins and big tanks of oil. Cars and trucks will fly by on your left side but where there are sidewalks, there aren't many walkers—meaning you're probably OK to ride on them instead of the road.

Once you've made it to Shearwater, your summer bike adventure dreams come true on the Shearwater Flyer Trail. The gravel path is hybrid bike friendly—and wouldn't be the worst if you've only got a road bike.

After 30 minutes of cycling, the Flyer Trail will take you to the start of the Salt Marsh Trail (you can opt to go straight here and make your way to Conrad's Beach or Lawrencetown Beach. The route stays flat but strong ocean winds can make it tricky). Turn right onto Bisset Road and ride mostly downhill all the way to the Rainbow Haven Beach.

Caora McKenna
Let the waves wash over you after that workout. Just make sure you have the energy to bike back.

That's it. It probably took one and a half to two hours, but you've made it. The second entrance has an old bike rack to lock up your steed—and then it's just you and the salt and the sand until you're ready to head home.

Prepare yourself for a tough pedal back up Bissett Road, but you can look forward to jumping on the ferry at the Woodside Terminal to get to Halifax—shaving the last leg off your journey.

Whether it's bike lanes or a Field of Dreams, some say you've got to build it before people will come, but when the sun is hot and the city's sweating, you might as well make do with what's already there.


Bike big or bike small
9 suggestions for where to ride

Dartmouth Waterfront
Paved and gravel, 3km. Starting at Alderney Landing, this stretch of trail runs from the Alderney Ferry Terminal to Woodside Terminal.

Shearwater Flyer Trail
Gravel, 6.5 km. Starts on the Department of National Defense lands in Shearwater and connects with the Salt Marsh Trail.

Chain of Lakes Trail
Paved, 7.3km. Starts across the road from the Atlantic Superstore on Joseph Howe. Winds its way to Beechville where the BLT trail starts and is part of the larger Rum Runners Trail.

St. Margaret’s Bay Trail
Gravel, 32km. Follows the BLT trail on the Rum Runner’s Trail and is worth taking to get to the Bike and Bean Cafe.

Rum Runners Trail
Gravel, 123km. Connects Halifax to Lunenburg—not for the faint of heart, but sections of this trail are worth tackling a little at a time.

Peggys Cove
Road and gravel, 81.9km. Just got a wider shoulder added, part of the journey is along the BLT Trail.