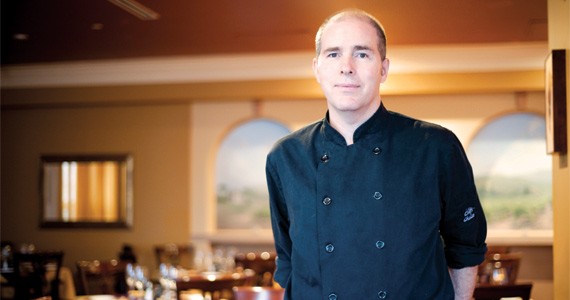 "That's Amore" is playing in the dining room at Cafe Chianti as I sit in the dining room, perusing the menu of classic Italian and Italian-American dishes--- beef carpaccio, cioppino, handmade potato gnocchi, linguine vongole, insalata Caprese, and various pizzas. It's fitting---Cafe Chianti is a classic.

"It is a little bit, maybe right off the bat, formal-looking," says Terry Vassallo, the restaurant's relatively new executive chef. The dining room is florid with gold and purples, murals of Italian vineyards on the walls, urns and potted trees. It's a grown-up restaurant that sets out to be comfortable and familiar to its longtime customers.

"But there's definitely something else that comes across," he says. "They really do convey this kind of convivial feeling that you get when you come into the restaurant; there's an atmosphere that's been created over 25 years with the same operator and his wife, Jan and Helen [Wicha]. They are an amazing host and hostess and, for me, I just think that that's just one of the great successes of Cafe Chianti."

It is success in Italian cuisine that brought Vassallo to Halifax. While he has only been the executive chef at Cafe Chianti for around six months, he spent the previous six years cultivating a sterling reputation at one of Nova Scotia's best Italian restaurants, the recently shuttered Trattoria della Nonna in Lunenburg. But he is no stranger to the city; he previously spent time in the kitchens at the Five Fishermen, Seven and Sweet Basil.

"I started off like almost everyone does," says Vassallo. "I went into a classic European or French style culinary program---and then I went to Vancouver where I did my apprenticeship and it just so happened that I apprenticed at an Italian restaurant. Prior to that, actually, my godparents owned a pasta factory in Calgary, so I took a year off university and I worked at the pasta factory which was really a full integration into a cuisine style that was dominant in my house."

At Cafe Chianti, Vassallo continues on his Italian path with dishes like light, airy calamari ($12) with a simple pomodoro sauce, made slightly spicy with crushed chillies and given a kick of salt with halved olives. And paper-thin ravioli ($25) that still has the slightest edge to it, filled with a silky smooth puree of butternut squash. The intense, creamy richness of brown butter crema with buttery lobster and sage is given relief by pert green onion. "Italian cuisine is very much ingredient-based, and the way I look at it---and I don't believe I'm the only one---it's almost like jazz standards," says Vassallo. "A pasta primavera or an aglio e olio: somebody came up with that and that's brilliant. But on top of that, when you take on a standard like that you start getting this type of confidence or you start reading what your client base is looking for and you start adding your own individual touches to it.

"I'm sure you've heard that thing where people have been to Italy and it's 'we just had a plate of tomatoes and a few torn sprigs of basil, and olive oil and sea salt, but we can't get that when we're here,' and 'we buy all those ingredients at the Superstore, but it doesn't taste like that.' I find that really intriguing and it's something I like to delve into---taking what I think the customer is interested in and just exposing them to my take on a standard, like a musician would."

A couple at the next table asks the server if Vassallo is in the kitchen. They tell her that they booked the Trattoria for their wedding three years ago, and have come to Cafe Chianti for their anniversary. When they're told he's there, cooking, it's nothing short of music to their ears.

Write your own review for Cafe Chianti here