Table of Contents for this Issue:

At only 15 minutes, this is a delightful, pensive little Fringe treat, easy to squeeze in between your other shows. Three characters orbit each other closely on a tightly cramped stage, but emotionally, of course, they’re each worlds away, navigating grief, the tension between science and the supernatural, and the logistical challenges of breakfast.

Performers alternate which role they play nightly, so keeners can go twice to get a nuanced experience. See this if you’ve ever felt lonely when faced with the vastness of the universe. —Nicole Maunsell

Everybody Dies in December
written and performed by Nancy Kenny


Nancy Kenny steps easily into the role of Claire, a third generation funeral director with a warm smile and comforting voice who talks to the deceased on her table with a generosity rarely paid to her in life.

Kenny's choice to address the audience directly gives an unsettling reminder that death is something we will all face, and her cheeky suggestion to "wear clean underwear" is the sort of dark humour that peppers the show. Her voice as Claire has an unsettlingly familiar tone of a person delivering bad news with a positive spin as she reveals her secrets.

The world Claire inhabits is claustrophobic, with friends and acquaintances appearing frequently on her table giving the impression that she lives in a small town with few choices. Claire lives with the expectation she will inherit the family business, get married, have a child, and it's assumed that she too will find herself on this table being prepared for her funeral.

Though the story is a familiar one at its heart, its unique telling is deliciously clever and funny and will leave you wanting to live your life to its fullest, because none of us are getting out alive. —Ian Mullan

God Made Me This Way!
written and performed by Joanne Miller

Before comedian Miller comes on stage, there's a projected image of a tie-dyed spiralized rainbow with the show title: God Made Me This Way! Seems like it would be gay, amirite?

Wrong. Joanne (also called MJ) Miller is a straight, middle-aged mother of three (her words). She's hard-working: her material is polished, word and gesture. MJ's Wall is her Youtube channel.

She talks about being raised Catholic, being mistaken for a Chinese boy, racism, Trump, women in comedy and more using a (fake) copy of Stand Up for Dummies and consulting ten chapters. The childhood stories were the best. The show felt long; maybe seven or eight chapters would have been enough. —JK

It's Greek to Me
written and performed by Kevin Gerald Connors

You have no idea how much of a struggle writing this review is. Although in my mind I can be a harsh critic, there is a part of me that wants all of you performers to do well, that believes that you should get some praise for your hard work, even if you don’t succeed in everything you try, that wants to find something good to say about even the most disappointing production.

Look, Connors is a hard-working performer, who commits to each character he plays, each dreadfully stereotypical, horribly hackneyed, woefully offensive...see I can’t do it.

Connors’ idea is sound and really promising. He plays, in succession, a series of characters from Greek mythology and performs a brief sketch based on their characteristics and the myths surrounding them. (By the way, while it’s far from the worst thing here, and I know acting is physically demanding, I could have done without Connors’ onstage gulping of water, heavy breathing and sighs of “oh boy” during character changes.)

Once you go through the theatre door, the idea is that you’ll be transported to Ancient Greece, but, well, it ultimately feels like you’ve been transported to the 1950s. The bevy of characters includes a pink-scarf wearing “flamboyant” Ares who’d rather have the blood of handsome young men spurting in his face than rape women (“eww”), an “urban” Zeus who calls women “bitches” and speaks on his cellphone with an equally “urban”-sounding Hera who threatens to mess up said “bitches,” and a thick-glasses-wearing Hades who throws out words like “shtup” and “tuckus” and talks about his mother-in-law moving to Florida. (Do you begin to see the problem here?) There’s also a joke about a man being raped by the Minotaur, just to cover all the bases.

At the end of the play Connors tells the audience he hopes he didn’t offend anyone, but I don’t really think he understands precisely what is offensive here. The show reminded me of nothing so much as the episode of The Simpsons where Krusty tried to revive his standup career by reviving the “golden” “ethnic” material of his formative years. It’s Greek is not just bad, it’s Mickey Rooney in Breakfast at Tiffany's bad. Avoid it. —Martin Wallace

In No Brag, Just Facts performer Andrew Wetmore gives a real life account of Lester Beeler, a resident of Bridgetown, Nova Scotia from 1918-1993. Wetmore throws himself into the role of Beeler, doling out anecdotes about times long since past as if they were his very own. Armed with a picture slideshow, a few props, and expressions from the time period, No Brag, Just Facts is an affable and endearing historical throwback.

Whereas the performance can benefit from a little more brevity, Wetmore has a very casual and relaxed presenting manner, which allows for the love for his subject matter to come through, and thus prevents his work from becoming dry or burdensome. This is a project of passion, which in essence is what Fringe is all about.

As No Brag progressed, I began wondering why Wetmore chose to invest in Beeler’s story. What it was about this man that so profoundly piqued his interest? It was not until this play’s conclusion, when Wetmore, lost so deep in the moment, looked out to the audience and said, “I love life here.” that I think I understood his reason, and it's a very comforting one at that. —Carey Bray

Rut is playing in a very small venue, and there is no room to cram in more chairs for an overflow crowd. Go to your communication device now. Buy your ticket now.

The stage is set with a small couch, table, and chairs. The actors do most of the shifting of this furniture, and do it very well. The library study table becomes a table in a bar with the addition of a red checked plastic table cloth. There's been some brainstorming somewhere to figure out how to do these shifts, and it all works very nicely.

First off, Mark Foster's writing is great. He has a terrific ear for dialogue. Everything the characters say (and they say a whole hell of a lot) rings true and natural. Characters don't proclaim. Sometimes they're fast talkers. Sometimes not. Just like in life.

Second, the acting is solid. It's real acting. All four actors do really fine work; Paisley Conrad as Hannah is the stand out. Her Hannah is a whirlwind of sour and sadness; elation and inebriation. She has a great potty mouth. She's the most physical of the four. At one point she and Molly are sitting on a table, with drinks; Hannah's drink is knocked over and a big puddle spreads over the table. Was it supposed to? Hannah takes off her shirt and mops it up, laughing. Or is it Conrad mopping up the mess, responding beautifully to an on-stage accident?

The four are watched by two gods: Latitua, God of Performance, and Coninua, God of Community, who start the play off and sit off to the side, occasionally commenting on the entanglements of the mere mortals, and pulling strings. Genny Dow's Latitua is a terrific worry wart; Edie Reany Chunn's Coninua is a bit of a smooth criminal. Props to costume designer Naomi Froese for their robes.

All that said, no fringe play should be more than 60 minutes long, and Rut clocks in at 80. Risky. Here's a thought: get rid of the Gods. The airy fairy question of whether or not they meddle with mortals could be tackled by Foster in another work. Here the nuts and bolts of how Jack, Molly, Hannah and Dez are going about things is much much much more interesting.

All for a measly five bucks. —JK

The Space Between
written and performed by Simeon Taole

At 85 minutes running time, The Space Between is by far one of the longest of this year’s offerings, but don’t let that daunt you. It is absolutely riveting from start to finish, and if justice serves, will win one of the Best Of festival awards.

Winston, a South African boy, meets a young American girl, Celeste, while his family is in the US. They develop a strong relationship, which is threatened by Winston’s return to South Africa, but they maintain it through years of correspondence as they grow from children to adults. Mail delivery to and from the States, however, takes months and the South Africa Winston returns to is still in the grip of Apartheid. The space between Winston and Celeste is broadened not only by geography and time, but also by experience, as Winston must deal with the constant threat of political violence as well as the normal pressures of growing up.

There’s some “multi-media” in this production (a small projection screen in the back), but it’s unnecessary. Cliches be damned, I couldn’t take my eyes off Taole. He’s an astonishing actor; with small shifts in tone, accent and posture he can immediately create a whole new character. There’s never a glitch, never a watch-checking moment—Taole fills every syllable with compelling intensity and full emotion.

He’s also, consarn him, a hell of a writer. Within five minutes of the show starting, I had already filled a page of my notebook with stand-out phrases, as when he speaks of the “euphonic misdemeanours” of names, a burden borne by the “named not the namer.” When Winston returns to his home country, he comes to a South Africa where “the rainbow is still anemic,” and rides in his father’s car, a unreliable vehicle nicknamed “Things Fall Apart.”

There is, unfortunately, only one performance of this show left. If you attend it, you could win, apparently, a trip to South Africa. I don’t know if that motivates you to see it, but if you’re motivated by the thought of spending an engrossing hour watching a performer who is at the top of every aspect of his game, then you should go. I all but insist upon it. —Martin Wallace

Behind the Curtain: the ticket desk 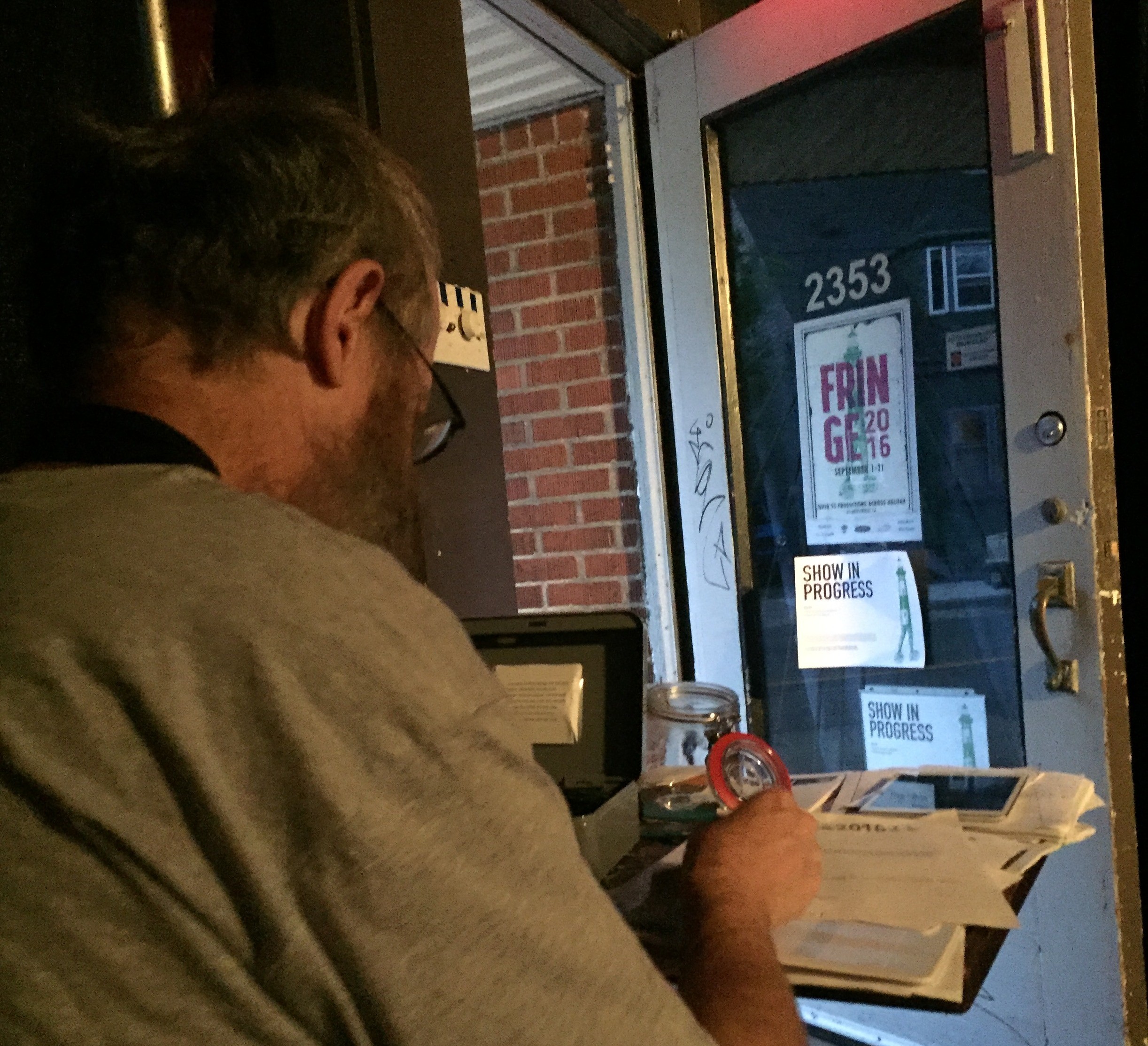 Kevin Bennett takes care of business at The Living Room.